The Seven Days of the Week

Evelyn Dunbar is perhaps best known for the 40-plus works she produced for the War Artists Advisory Committee during the Second World War, when she was the only woman employed on a full-time salaried basis.

Having completed her first major project, the murals at Brockley School (1933-36), Dunbar found herself without a project or regular income. It’s at this time that she began Seven Days. The painting is inscribed with ‘design for mural’ but no known mural commission exists to which it relates. However, the red outlines visible on the painted figures indicate an attempt to transfer the composition onto another surface. Maybe Dunbar was inspired by her commission to illustrate the 1938 Country Life Gardener’s Diary or her subsequent painting An English Calendar (1938), to try another composition showing everyday life broken into an ordered series.

Reading left to right, the week begins with a Monday washday. Tuesday to Thursday reference gardening and appear to be working as a team. Friday has gathered the results of that labour into a sack. Saturday is all dressed up, prepared for socialising and holds the gift of a bowl of fruit. Sunday is absorbed in a book, perhaps a Bible, attending to matters of the mind. Shadows shorten as each day is captured at a different stage and we move from dawn to afternoon, with the sun lighting up the top of the wall behind Sunday. The bare ground in front of the figures of the working week, boxed in by the blue trellis, is juxtaposed by lush grass in front of the weekend. A door behind Sunday also indicates a potential escape from the rhythmic march to the left.

Read in relation to Dunbar’s Christian Science beliefs, Seven Days functions as an illustration of our duty to care for and tend the land given by the Creator, demonstrating that hard work, order and belief will enable the cycle of the earth’s provision to continue. In comparison with an earlier study for Seven Days, the final painting conveys this message more directly. In the study, the Monday figure holds a baby while Sunday dances in celebration. In early 1938, Dunbar suffered a miscarriage and the relationship with her former tutor Charles (Cyril) Mahoney ended. Perhaps, then, the mother figure became too personal a reference, and the Sunday figure was made less jubilant and more contemplative to reflect a period the artist later referred to as a ‘crisis’. Dunbar’s combination of religious themes with modern everyday life is reminiscent of the work of Stanley Spencer, whilst her sparse scenery and use of strong shadows lends the painting a surreal edge suggestive of Giorgio de Chirico.

Following her death in 1960, Dunbar became overlooked as an artist and a large collection of her neglected work was passed down through her family, who gradually lost sight of its importance. Following the appearance of Autumn and the Poet (1960) on The Antiques Roadshow in 2013, the family rediscovered her work, including Seven Days, which had lain in storage for over 50 years. 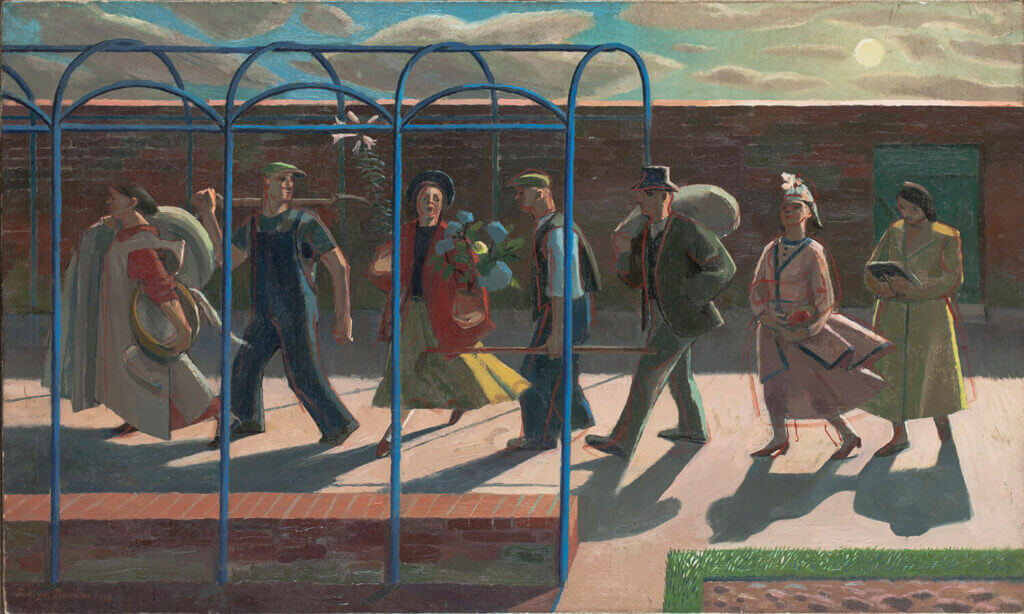 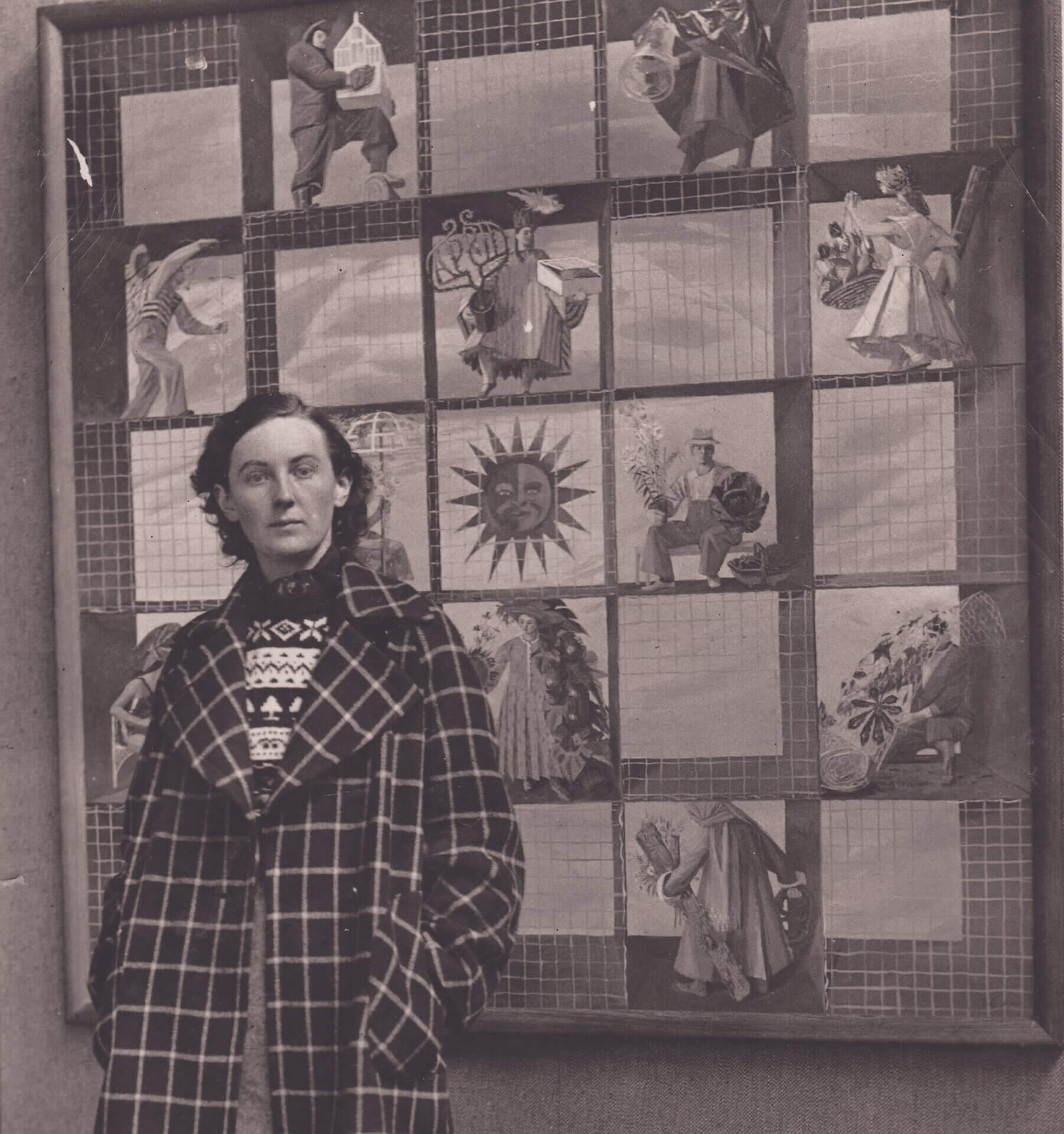 Evelyn Dunbar studied at Rochester School of Art, Chelsea Schoolof Art (1927) and the Royal College of Art (1929 - 33). She paintedmurals from 1933 -36 at Brockley School, a collaboration with herRCA tutor (and lover) Cyril Mahoney (1903 - 1968) and in 1937they wrote and illustrated together Gardeners’ Choice. In 1938 she set up the Blue Gallery in Rochester, exhibiting herown work alongside that of Edward Bawden andBarnett Freedman and others. In 1940 she wasappointed an Official War Artist, becoming the only woman (amongst36 men) to be accorded a full time salaried position by the War Artist’s Advisory Committee (WAAC). She held her only solo exhibition at Withersdane, Wye, Kentin 1953, although the WAAC included numerous pieces in touringexhibitions ranging from Aberdeen Art Gallery to MOMA, New York. A posthumous exhibition was held in 2006 at St BarbeMuseum and Art Gallery, and in 2015 Liss Llewellyn mounted amajor retrospective of her recently rediscovered studio at PallantHouse Gallery.

The Seven Days of the Week 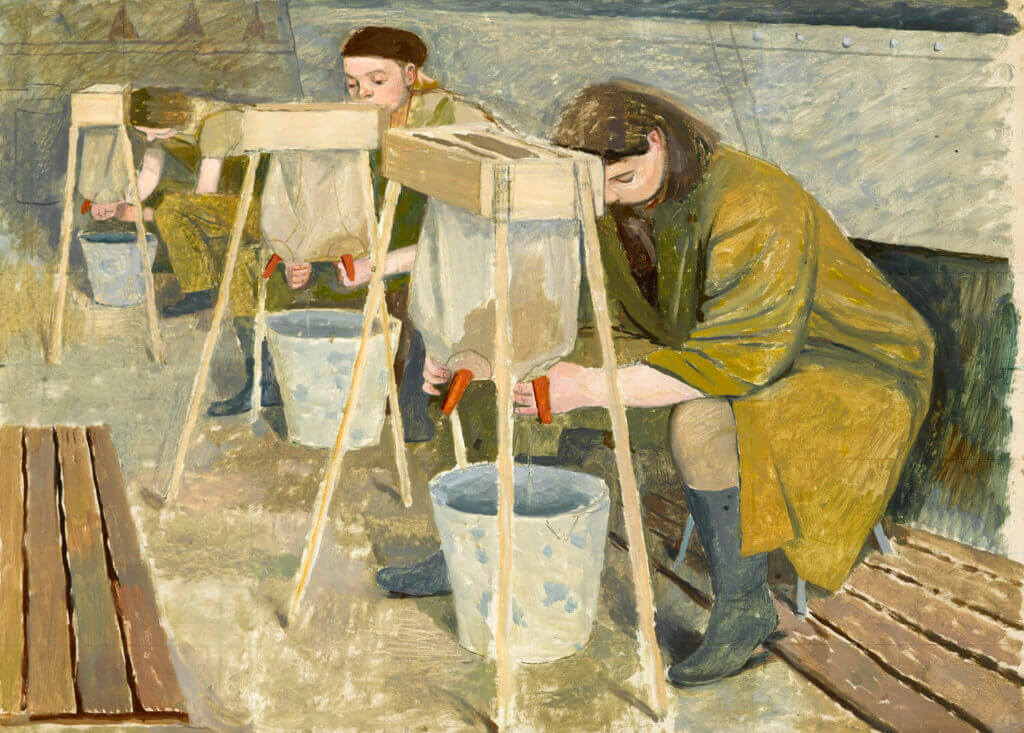