Protest, Participation and Solidarity; Headwear in the Work of Zanele Muholi

Zanele Muholi (b.1972) is a South African visual activist and photographer whose work has been exhibited to critical and public acclaim all over the world. For over a decade they have documented black lesbian, gay, bisexual, transgender and intersex people’s lives in various townships in South Africa and beyond, as a way of responding to the continuing discrimination and violence faced by LGBTI communities. Activism is central to Muholi’s photographs, which express notions of empowerment through black self-representation.

“I aim to teach people about our history” Muholi explains, “to rethink what history is all about, to reclaim it for ourselves, to encourage people to use artistic tools such as cameras as weapons to fight back.”

Each of Moholi’s portraits follow a similar format: models are shown in close-up and in half-profile and focus their full gaze on the lens. The portraits are characterised by the models’ proud expressions which instigate an unsettling and intimate confrontation with the viewer. Central to Moholi’s images are the use of extraordinary headgear and hairstyles which, far from being decorative accessories, are used to express multiple personas and layers of historic, cultural and political meanings. In this blog post, we highlight a few examples: 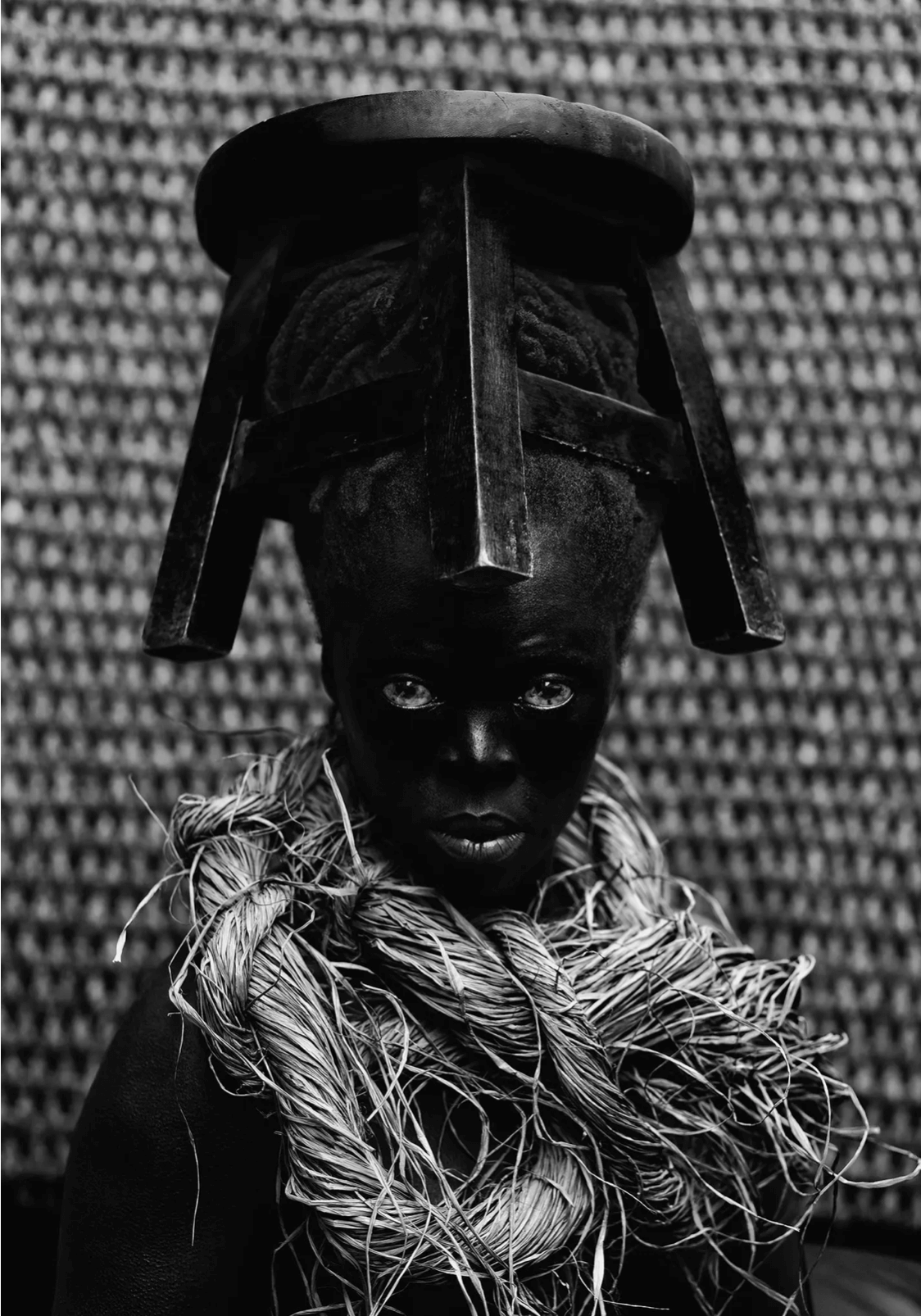 In this photograph, Muholi has a wisp of straw around their neck and is wearing a rustic wooden stool on their head like a crown, as a way of commenting on the power of props to reconfigure bodies and condition our way of seeing them. 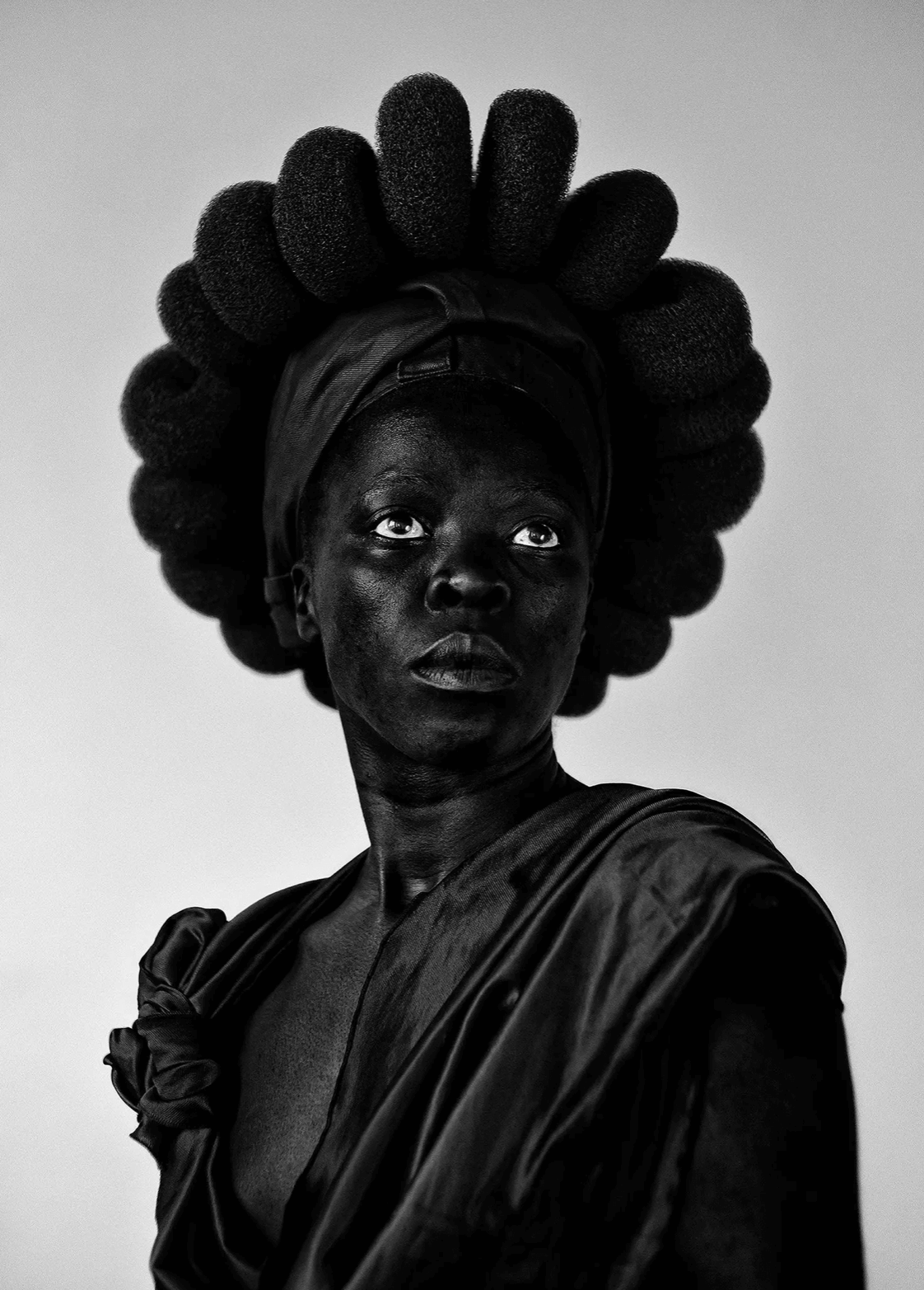 In this photograph, Muholi impersonates the Statue of Liberty, whose hair has been replaced by a crown of black scouring pads. Reclaiming a familiar icon, the photograph asks uncomfortable questions about the alleged universality of the statue’s symbolism. As Muholi’s explains: “What is the color of the Statue of Liberty? . . . I was thinking of black women who were civil and human-rights activists and criminalised for their activism, and how today so many women are prisoners in their own lives, neither free in their domestic situations nor in society at large – especially women of colour”. Put simply, “liberty” is not a condition accessible to all women. 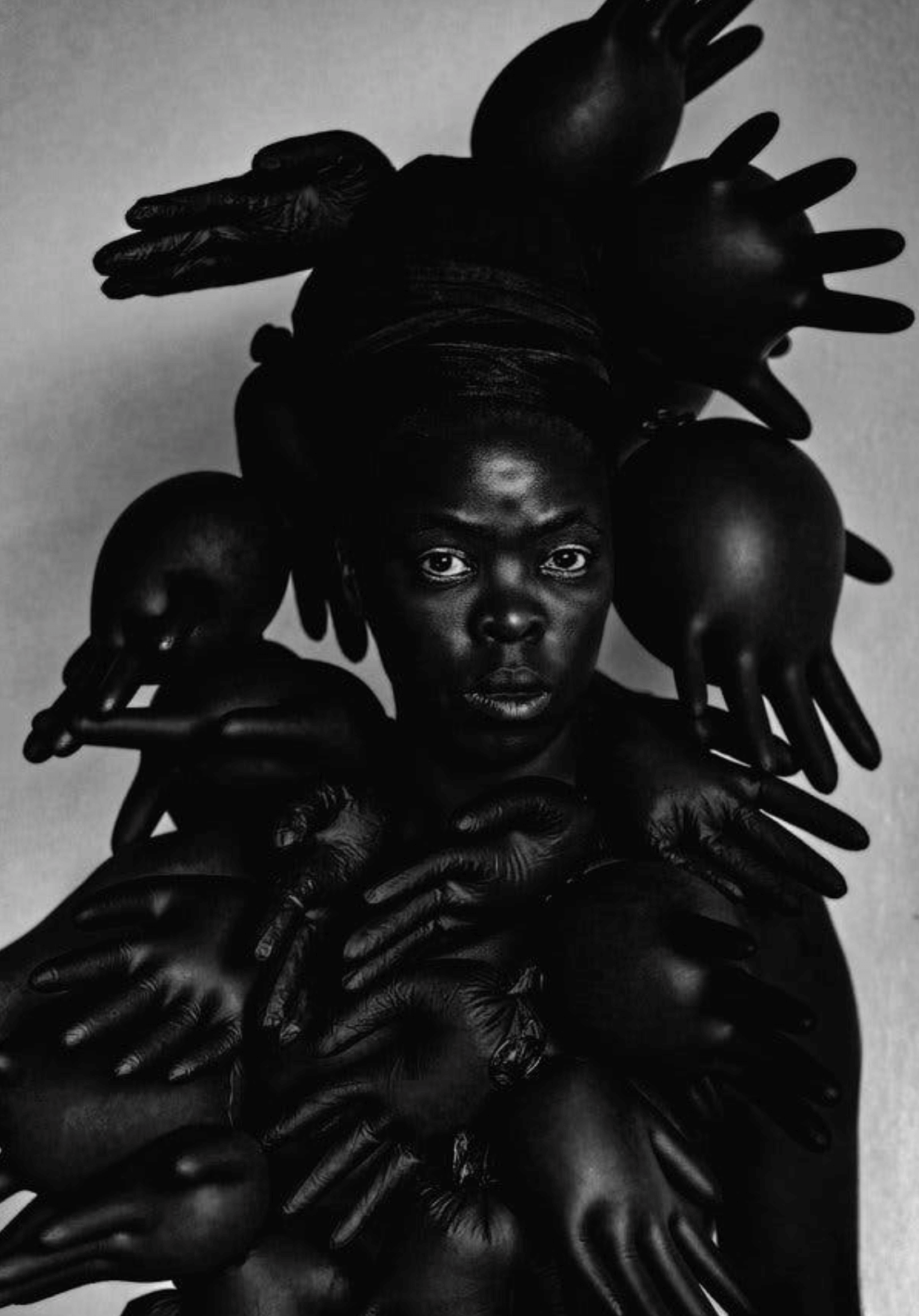 In this photograph, Muholi wears a headdress of inflated latex gloves. Explaining this work, Muholi explains the images multiple meanings, including ‘balloons and play” but also ‘the constraints of work and domesticity’ and ‘the need to breathe, to feel deflated’. 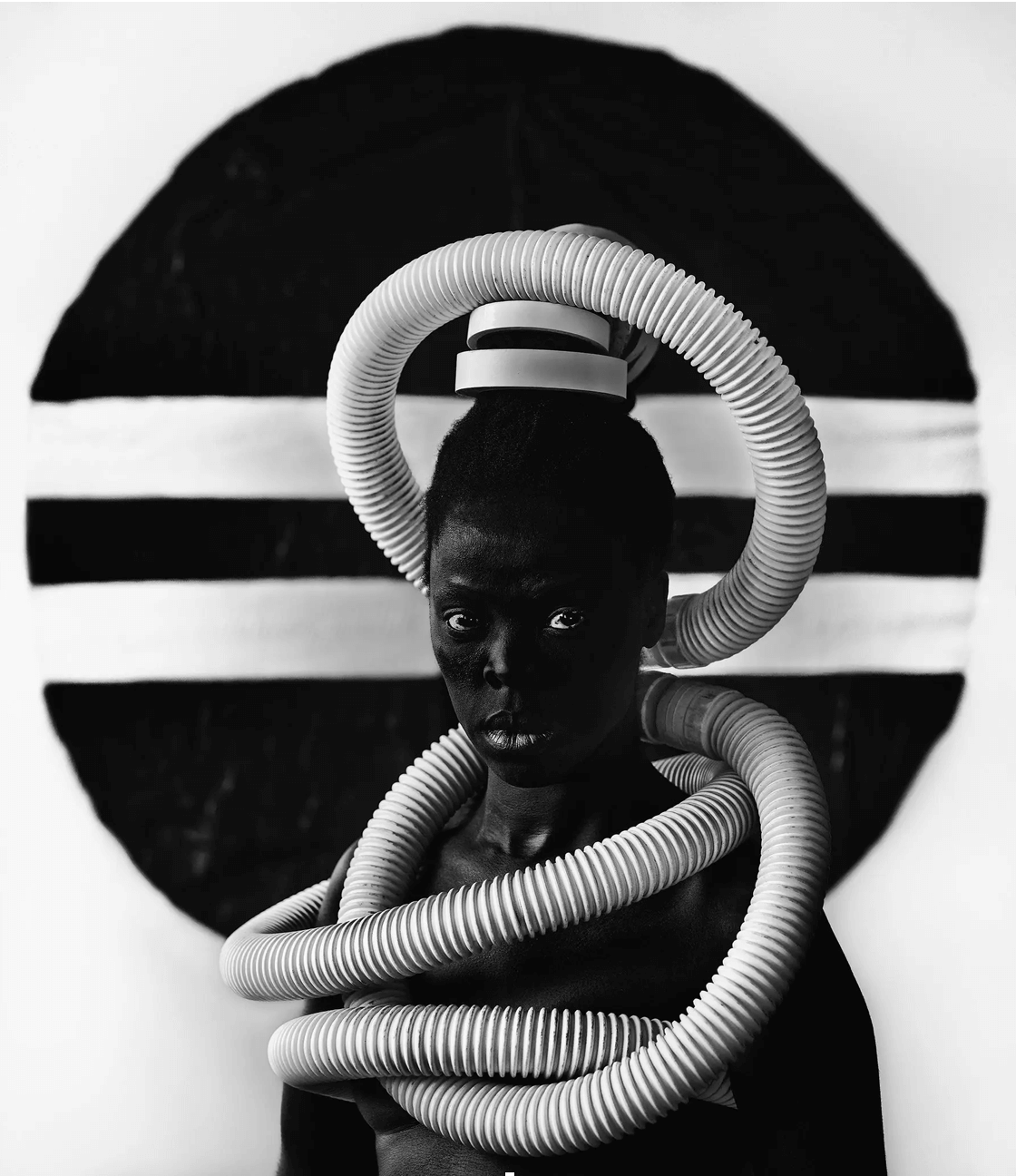 In this photograph, a striking figure is engulfed by a snakelike vacuum-cleaner hose. The figure’s strong and defiant stare and upright pose convey power and dignity, refusing to be defined by the prop’s symbolism of women’s work and domestic labor. 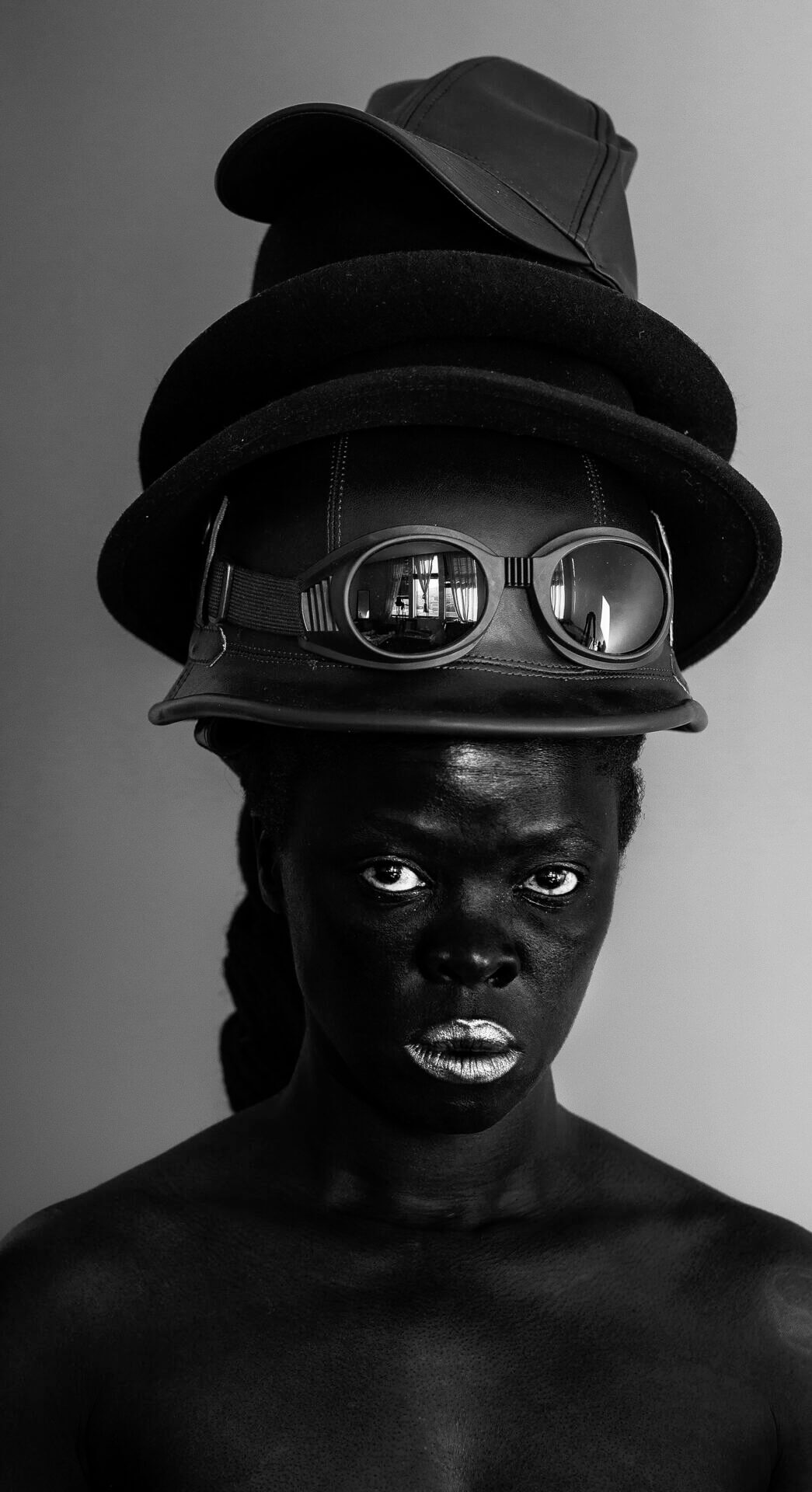 In this photograph, Moholi wears a miner’s hat and goggles, and stares out at the viewer with an unsettling glare. The image remembers the 2012 Marikana massacre in South Africa, during which 112 striking miners were shot down by police, of which 34 lost their lives.

Muholi is non-binary and uses they/them pronouns, explaining that they “identify as a human being”.