Emmy Bridgwater: The Edge of Beyond

Swans, ravens, hybrid bird-women: these are the creatures of Emmy Bridgwater’s lyrical but sinister Surrealist world. As a founding member of the Birmingham Surrealist Group, she was committed to bringing André Breton’s original vision to life in her home town. The subversive narratives of her paintings, ink drawings, collage and poetry, show her exploring identity, death, the subconscious and sexuality through a screen of mythology. 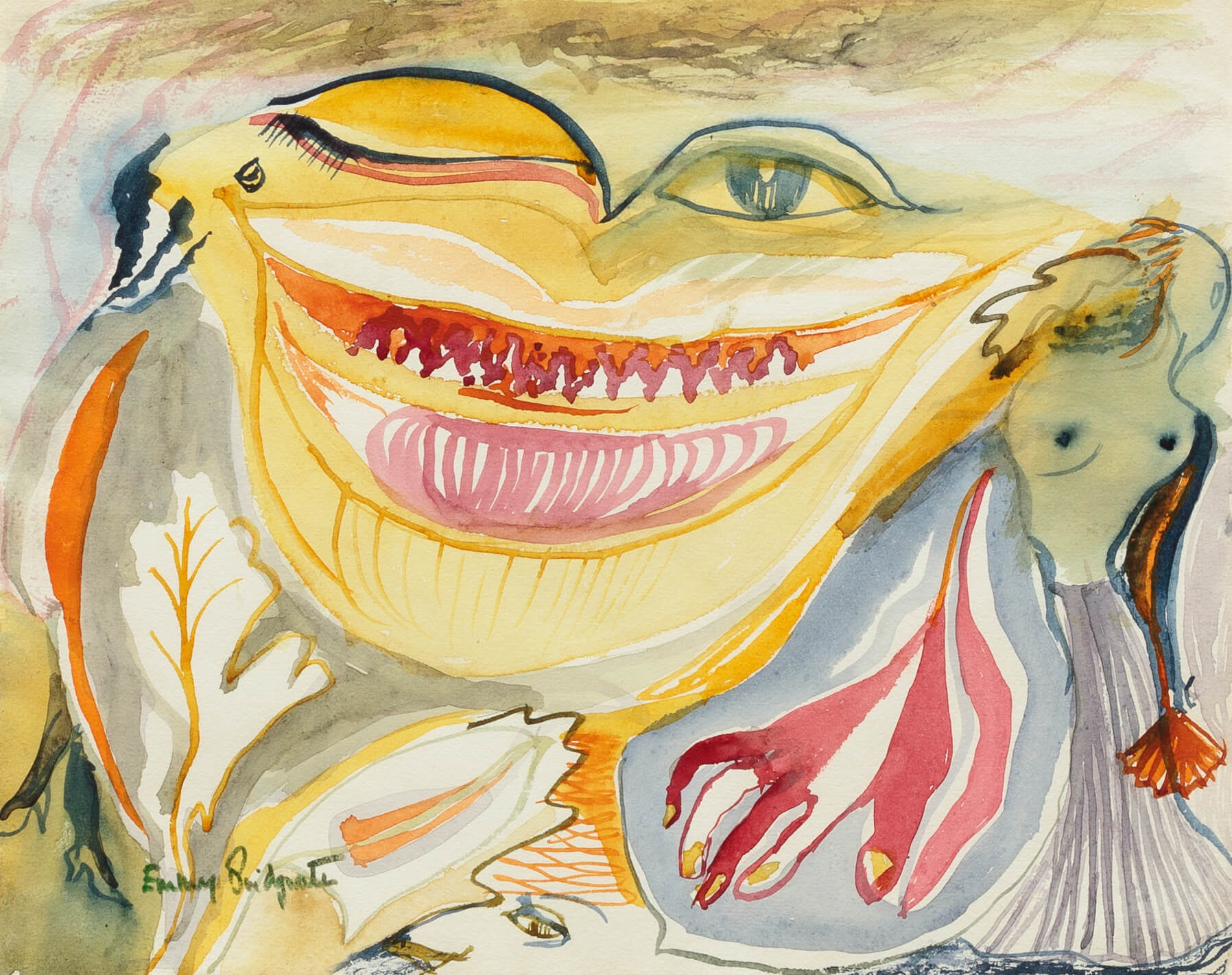 Born in Edgbaston, Emmy Bridgwater’s art education began at the progressive Birmingham School of Art, where she studied for three years under Bernard Fleetwood-Walker. It was in 1936 that she then attended the London International Surrealist Exhibition, which she regarded as “quite a revelation”, inspiring what she termed a “transformation” upon her artistic practice and career. Here, she also crucially met Birmingham-based artists Conroy Maddox and John Melville, and the writer Robert Melville: together, they established the Birmingham Surrealist Group, along with artists Oscar Mellor and Desmond Morris. 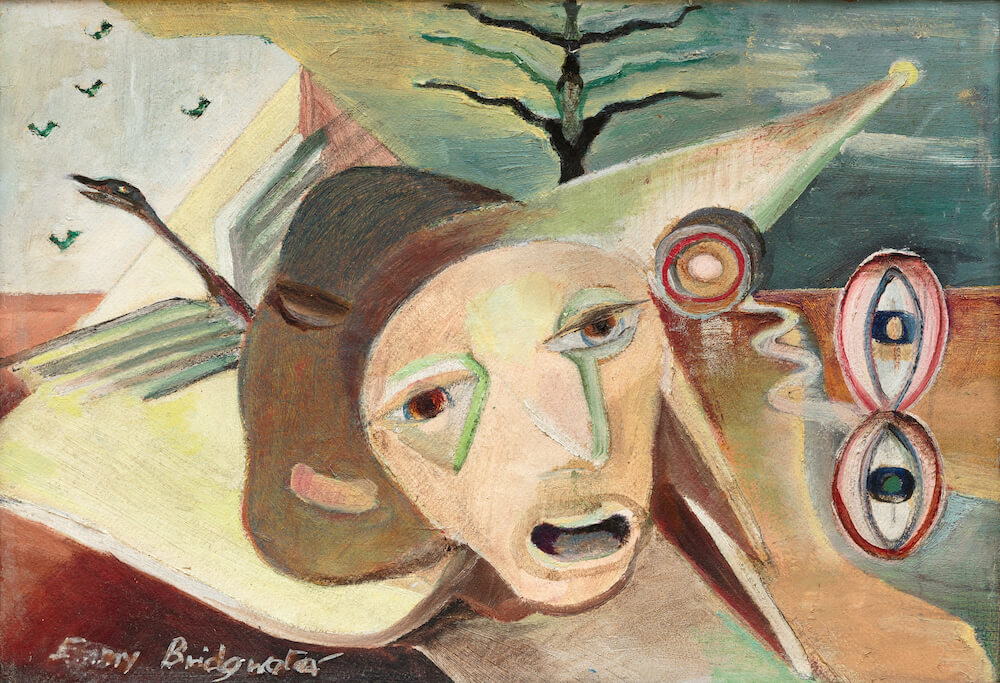 The Birmingham Surrealists would meet in the Kardomah Café in New Street, the Trocadero pub in Temple Street and at Conroy Maddox’s house in Balsall Heath. From the outset the Birmingham Surrealists were distinguished by their opposition to a London-based vision of Surrealism, which they saw as inauthentic or even anti-surrealist. They preferred, instead, to build links directly with Parisian Surrealism, and met with André Breton, Max Ernst and Salvador Dalí in Paris.

At the same time, Bridgwater acted as an important link between the Surrealists of Birmingham and London. Whilst aligned with the Birmingham Surrealists, she spent time with the London-based British Surrealist Group, and exhibited with them. She made a close and significant friendship with fellow female Surrealist Edith Rimmington, and their work – with shared, other-worldly symbolism – shows this connection. 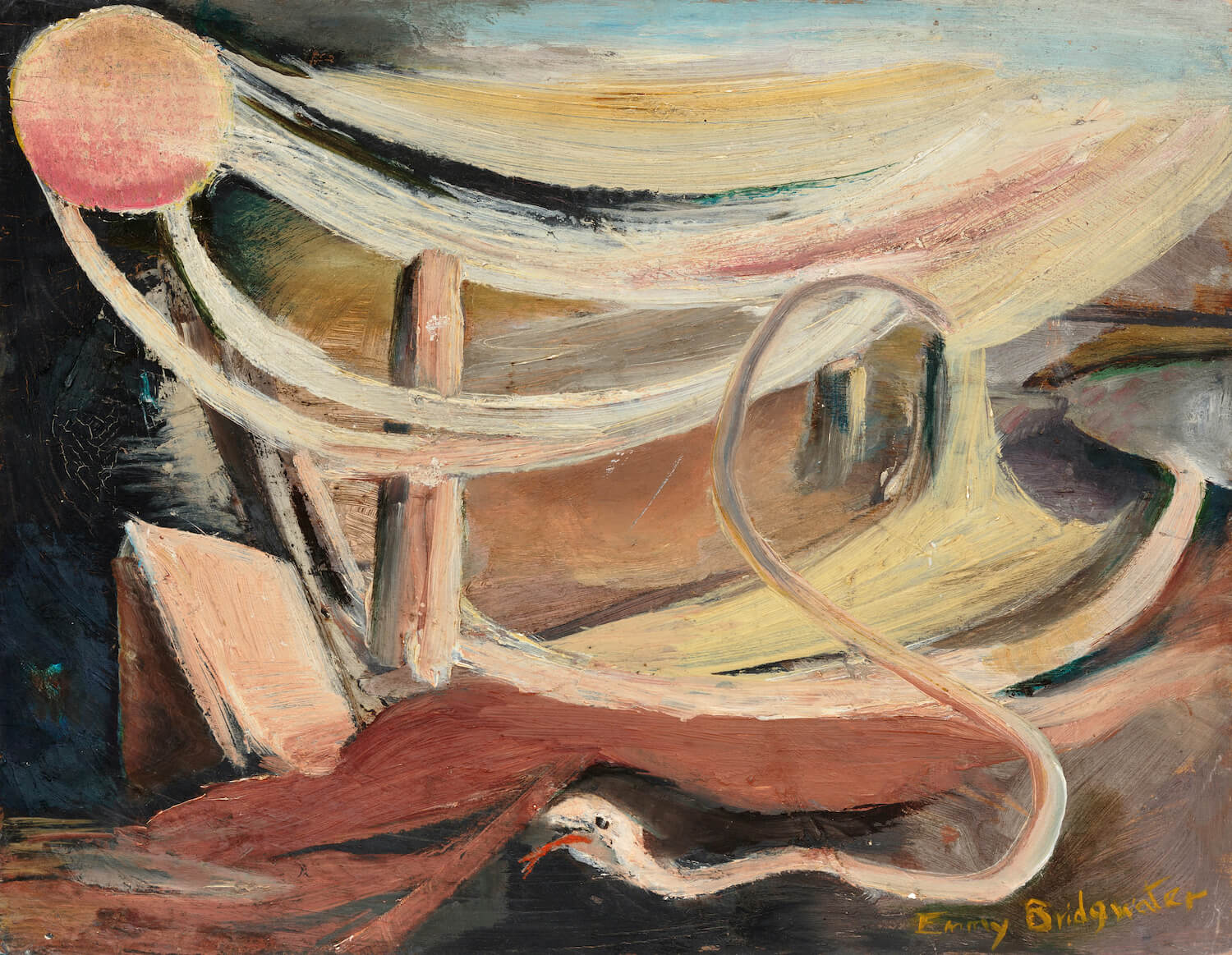 Bridgwater was one of the women artists who emblazoned Surrealism with sexual subversiveness and mythical figures. While cats appear in the paintings of Leonora Carrington and dogs in the work of Dorothea Tanning, Emmy Bridgwater and Edith Rimmington were drawn to birds. From the late 1930s onwards both artists began to depict hybrid, metamorphosing bird-people, ravens, swans and eggs in deserted, dreamscapes.

In one of Bridgwater’s most significant paintings, ‘Night Work Is About To Commence’ (1943), a dark raven (a recurring creature in fairy tales, including the Brothers Grimm’s ‘The Raven’) perches on the edge of a bathtub, on a draped piece of fabric. Besides and within the bath are domestic items, including what looks like a loom and a clothes horse, echoing the title’s reference to work.

Night Work Is About To Commence (1943) © The estate of Emmy Bridgwater. Photo by Birmingham Museums Trust

In ‘Foot Prints’ (c.1945) a female figure is circled by these same birds, which again appear in ‘Paradise Flown’ (1956). In paintings such as these, Bridgwater has invoked the Surrealist principle of juxtaposing unusual and disparate objects to reveal new, surreal, narratives. Like many of the women Surrealists, Bridgwater would subvert domestic spaces, re-imagining them in uncanny and claustrophobic terms. 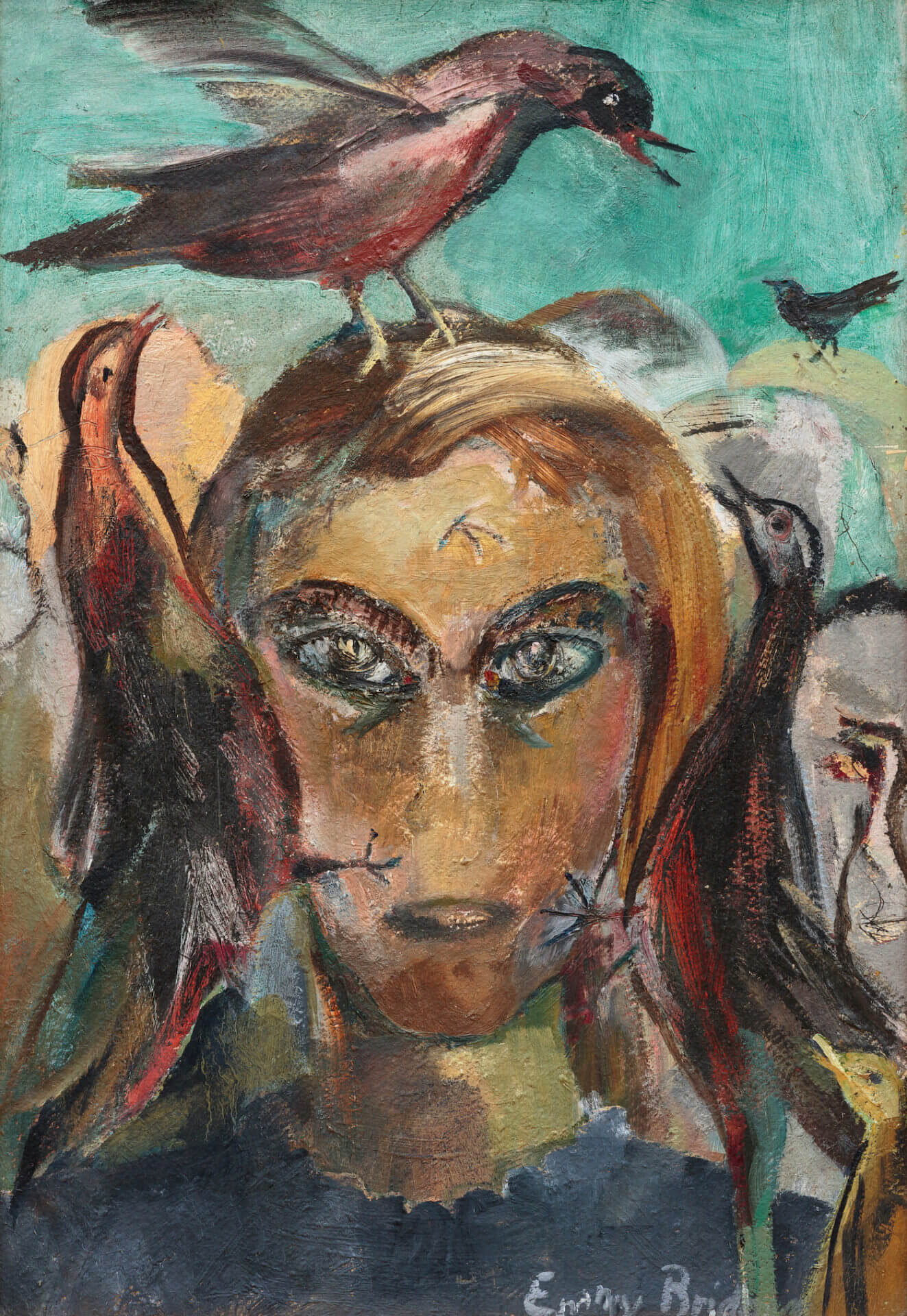 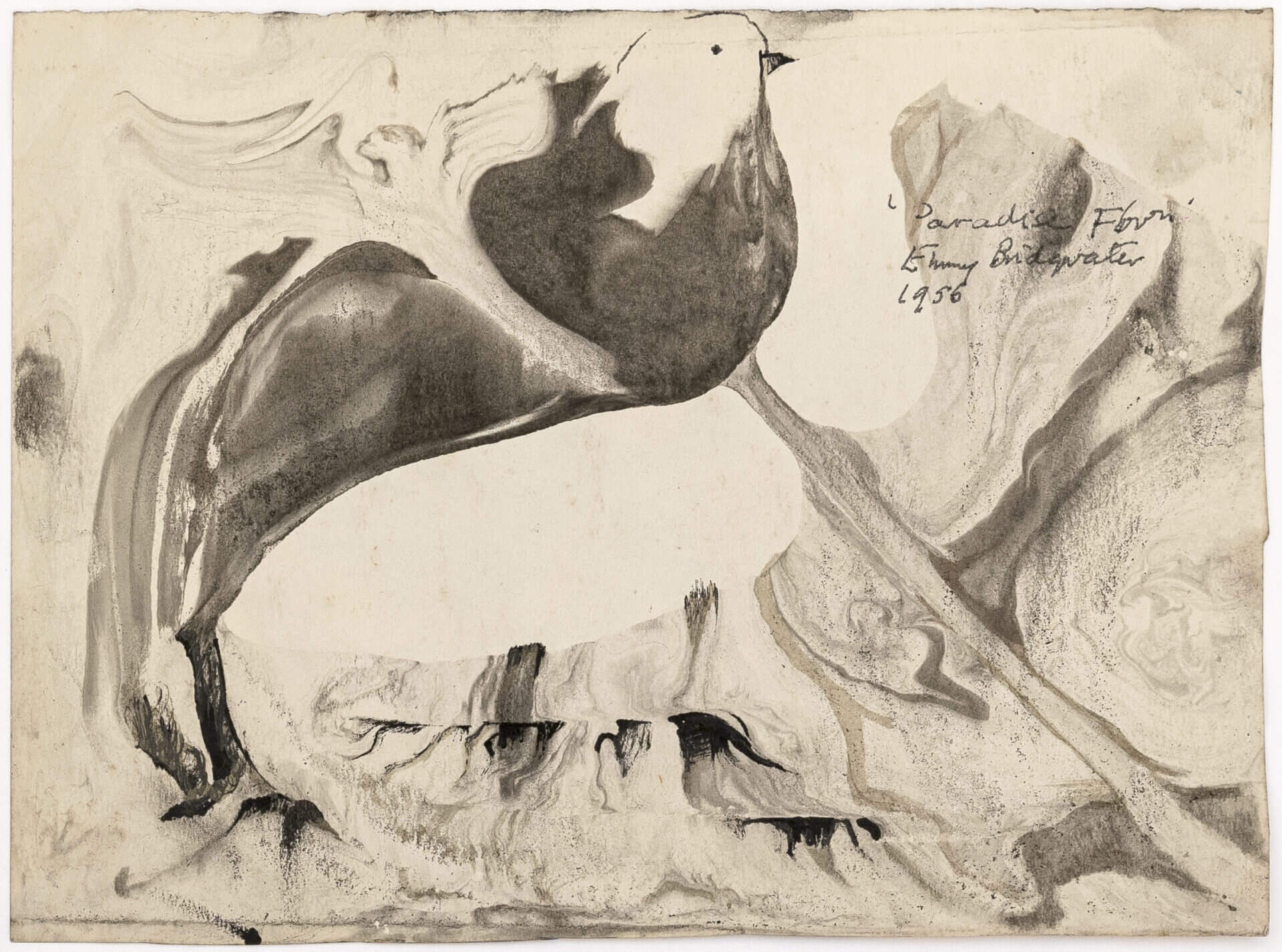 During the 1930s and 40s Bridgwater continued to develop her Surrealist style. She began to explore the more fearful sides of the imagination by using ‘automatist’ techniques being experimented with by leading Parisian Surrealists, such as André Masson. She would attempt to draw without consciously controlling the movements of her hand, allowing the subconscious mind to take over in emotionally charged landscapes, such as ‘Meanings in the Round’ (c.1939). 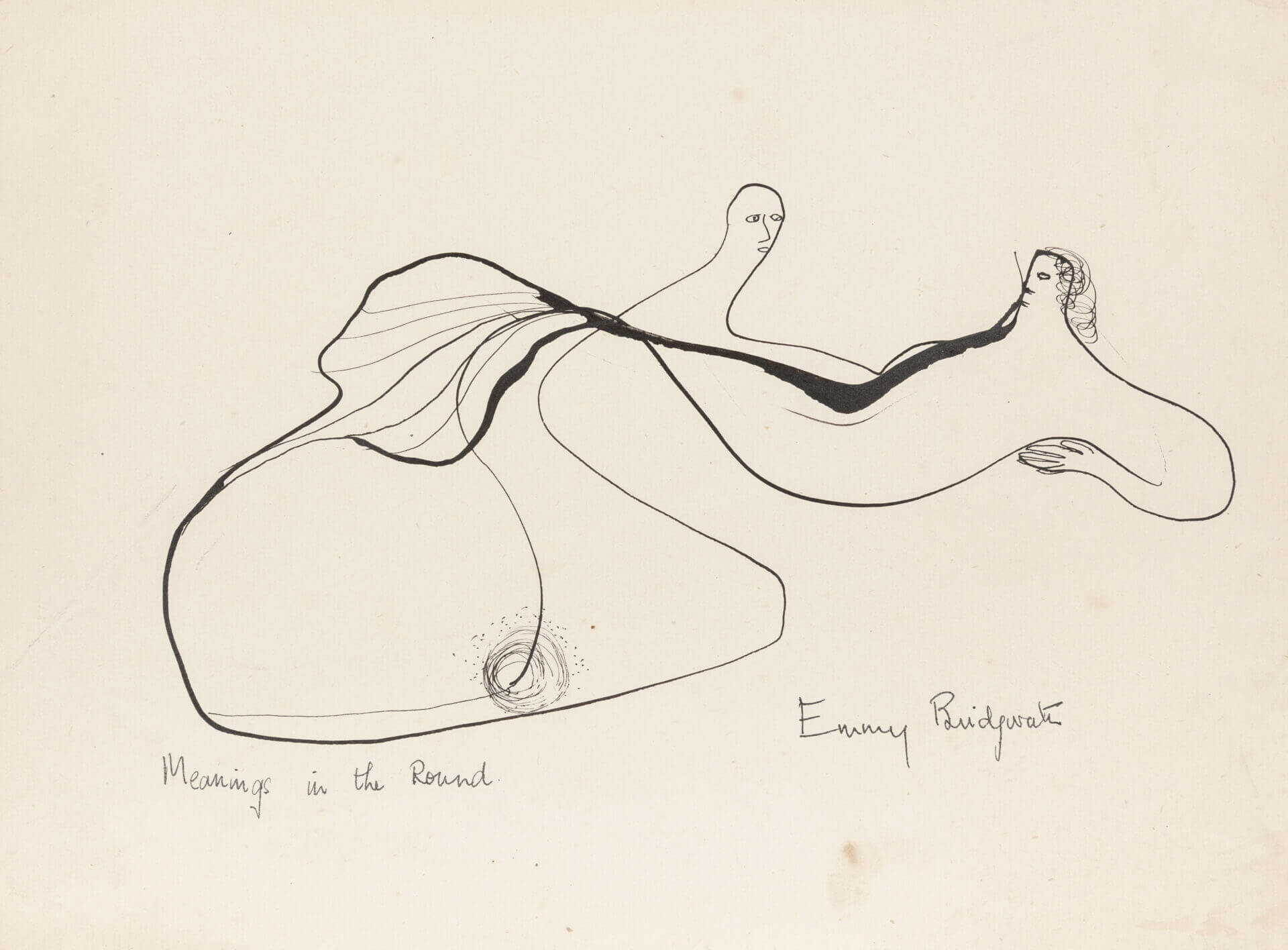 Throughout her successful career Bridgwater maintained a strong relationship with André Breton: she was elected to travel to Paris to sign the declaration of the Surrealist Group in England, reaffirming their allegiance to the principles of Surrealism, in 1947. In the same year, Breton selected her as one of her paintings, together with just four others from British Surrealists, to be exhibited at the International Surrealist show at Galerie Maeght in Paris. 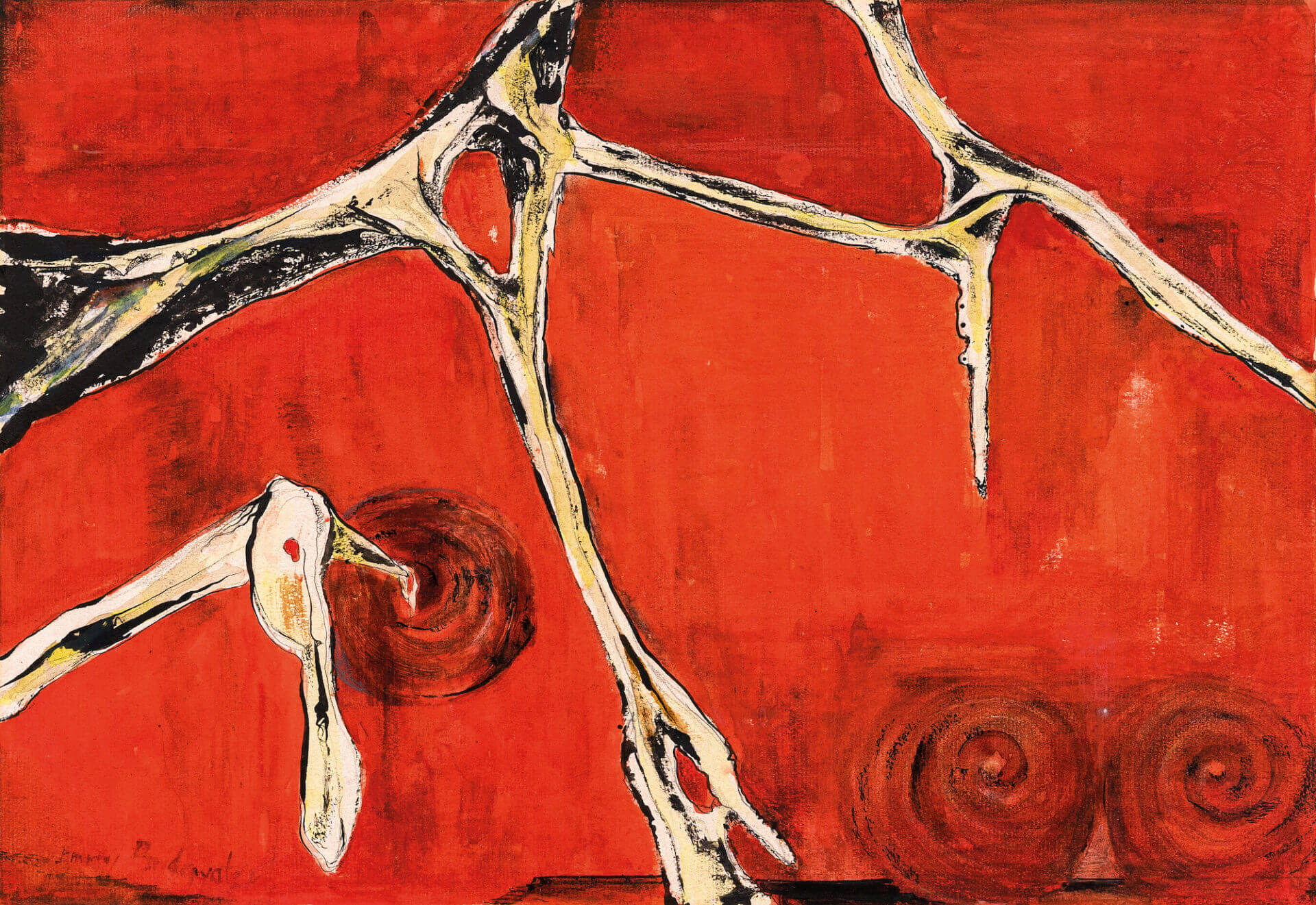 Back in Britain, she exhibited in group and solo shows at many galleries including The Mayor Gallery in London, Leeds City Art Gallery and Blond Fine Art, gaining the respect of her peers and critics alike. “We do not see these pictures. We hear their cries and are moved by them. Our own entrails are drawn painfully from us and twisted into the pictures whose significance we did not want to realize”, wrote Toni del Renzio. Meanwhile, Robert Melville commented: “…although they are dreamlike in their ambiguity they are realistic documents from a region of phantasmal hopes and murky desires…” Michel Remy described her as an “explorer of the sulfurous lavas and springtimes of the unconscious.”

Alongside her art, Emmy Bridgwater wrote poetry, populated by the same symbols and metamorphosing creatures from her drawings and the recesses of her mind: birds, plants, spirals and “twisted forms”. She successfully published her poems in significant surrealist and modernist publications, including Arson, Free Unions–Unions Libres and Le Savoir Vivre. Her poems are a testament to her inventive, visionary imagination. 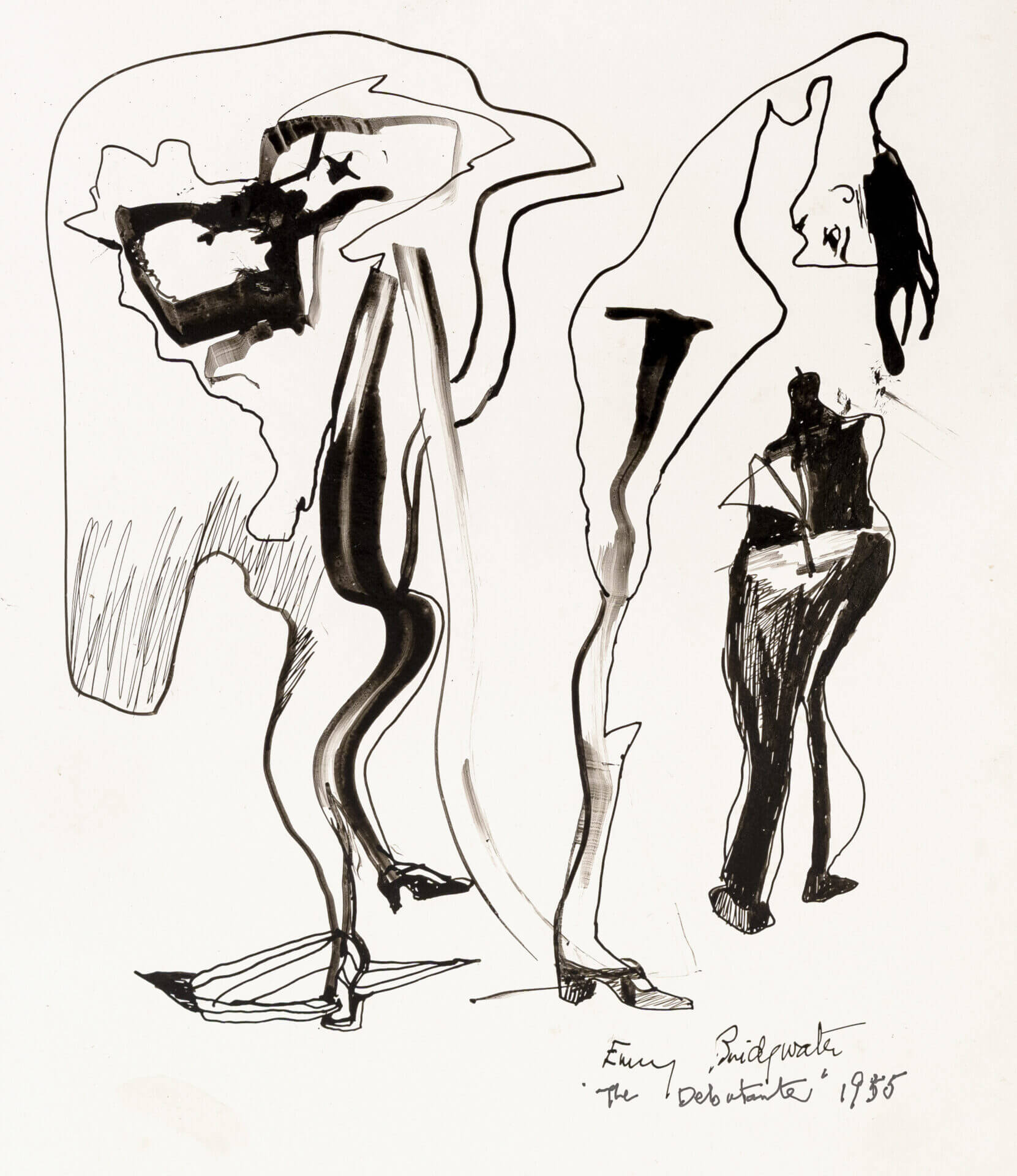 But, and as has been the case for so many women artists throughout history, caring duties took precedence over Bridgwater’s career – she had to look after both her elderly mother and disabled sister throughout the 1950s and 60s. Bridgwater did then return to the scene in the 1970s, when she primarily produced collages, and exhibited in numerous group Surrealist shows. 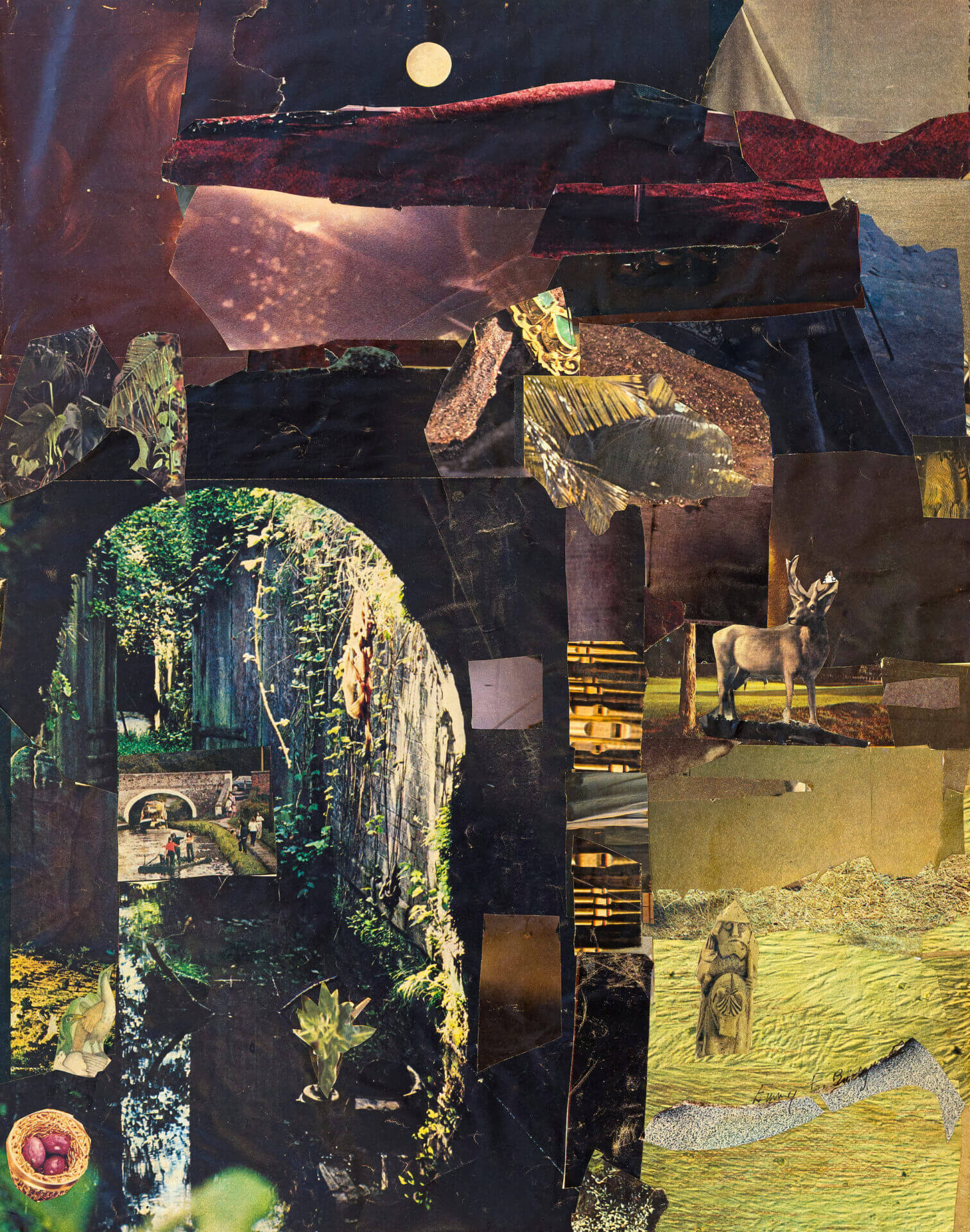 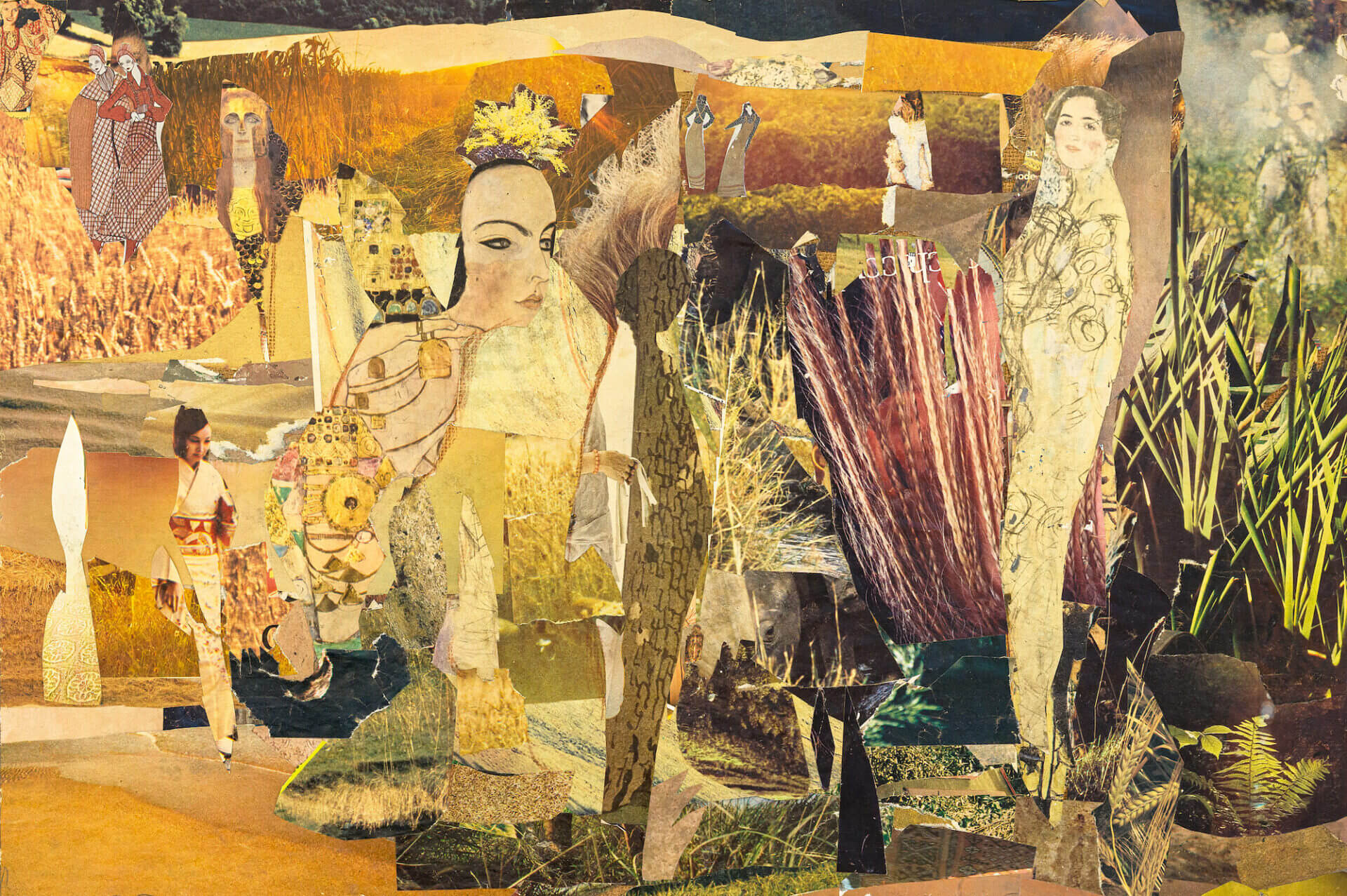 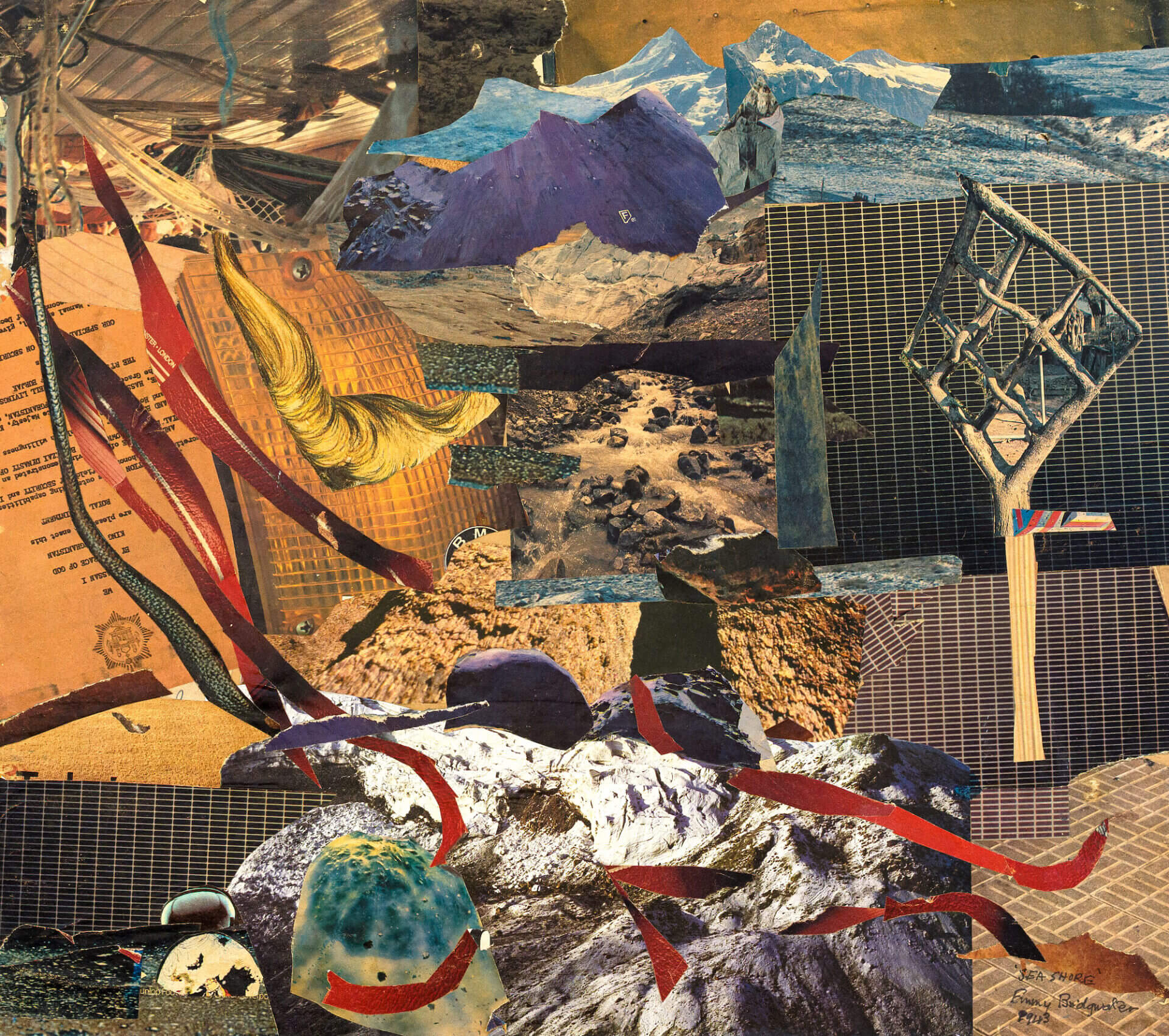 Then, throughout the 1980s and 90s, the art world’s interest in her work continued: she was included in retrospective Surrealist exhibitions in both public and private galleries in Birmingham, London, Milan and Paris. Bridgwater was a hugely significant figure in British Surrealism, which has had a lasting influence on modern and contemporary artists, such as Stanley Spencer, Paula Rego, Peter Doig and Kiki Smith. 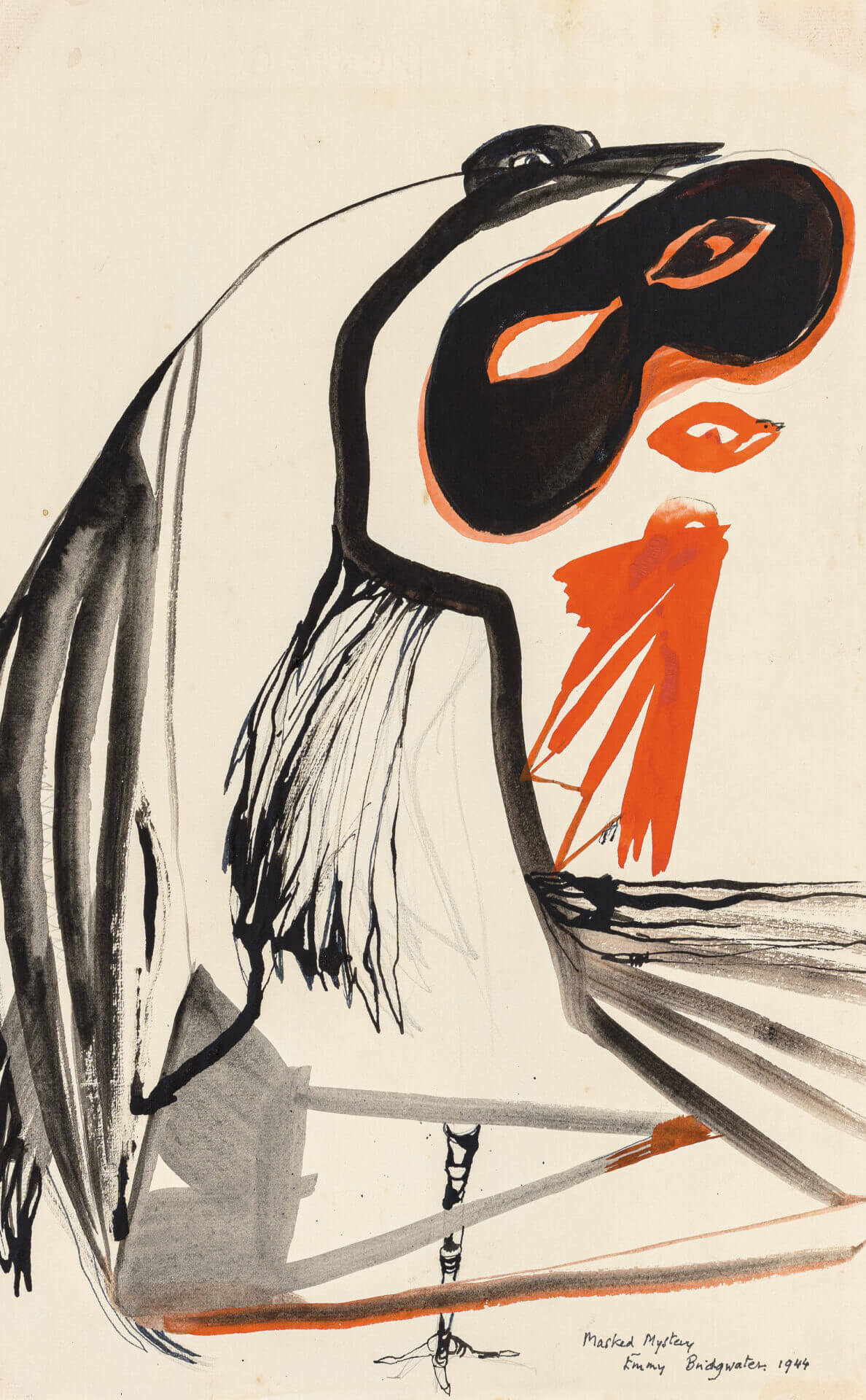 Nevertheless, as both a regional and female surrealist, Bridgwater has been overlooked, especially during recent decades, and to many, she is yet an unknown member of this pioneering movement, in which she played such a leading role.

In 2022, she is having a retrospective, and her first solo show in 32 years, at The Mayor Gallery. Including never-before exhibited paintings, collages and drawings, this exhibition titled Emmy Bridgwater: The Edge of Beyond presents her as an imaginative and visionary surrealist, whose complex narratives of the subconscious speak for themselves. A heroine of female, Birmingham and British surrealism, it’s time that her story was retold for today’s audiences and that she was rediscovered, not to be forgotten again. 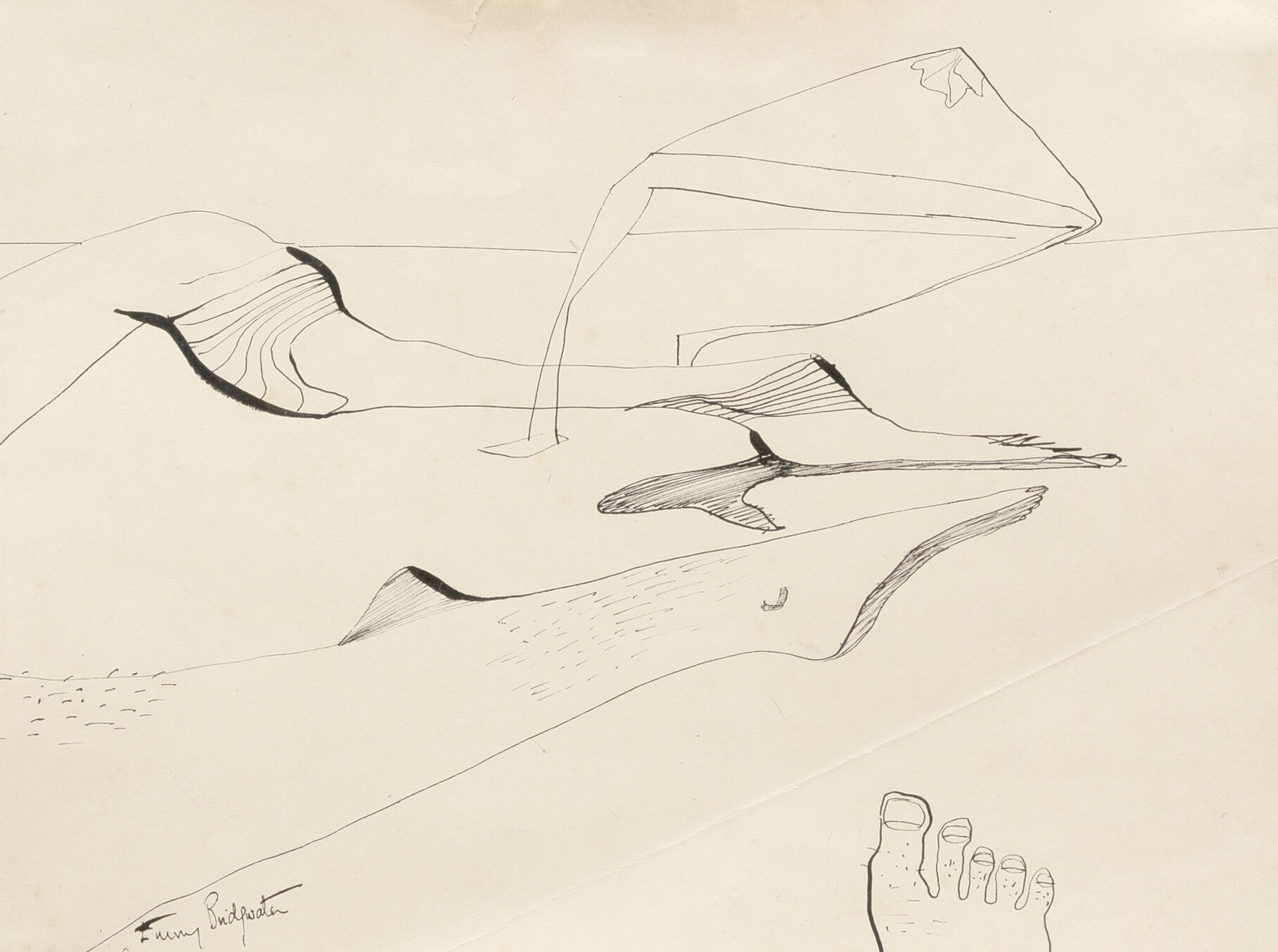 Ruth Millington is an art historian and author, researching women artists and muses. Her first book ‘MUSE’ (Penguin, 2022) reclaims the term to celebrate the contributions of inspiring real-life individuals throughout art history.