“In my view a successful portrait must be a successful work of art first, and this I would measure in terms of evoking and communicating emotion. This is the elusive and difficult thing to strive for. Then again, painting a portrait is usually quite a direct route to uncovering the emotions of both yourself and the sitter.”

Can you provide a short one-paragraph introduction to your life and work?

I was born and raised in South Africa. I studied art at the University of Pretoria, SA and Massachusetts College of Art, USA. I have never been anything other than an artist and a mother. After my three year spell at Massachusetts I moved to Berkshire in England, where I have lived and worked since 1994.

I loved to draw and make things from a young age, mostly preferring my own company. My mother agreed to arrange art lessons for me when I was about nine, with a wonderful inspirational woman called Ines Aab Tamsen. This was on Friday afternoons, my highlight of the week, and the arrangement lasted until I left school at the age of seventeen. Becoming an artist never really occurred to me, because I had no idea how one would go about doing that. I was always passionate about art I growing up I didn’t know many people who shared this obsession with me. Going to university was something you just did after leaving school, and to me the obvious choice was enrolling in the BA Fine Arts degree. What I loved most about these four years was being among people who loved art as I did. 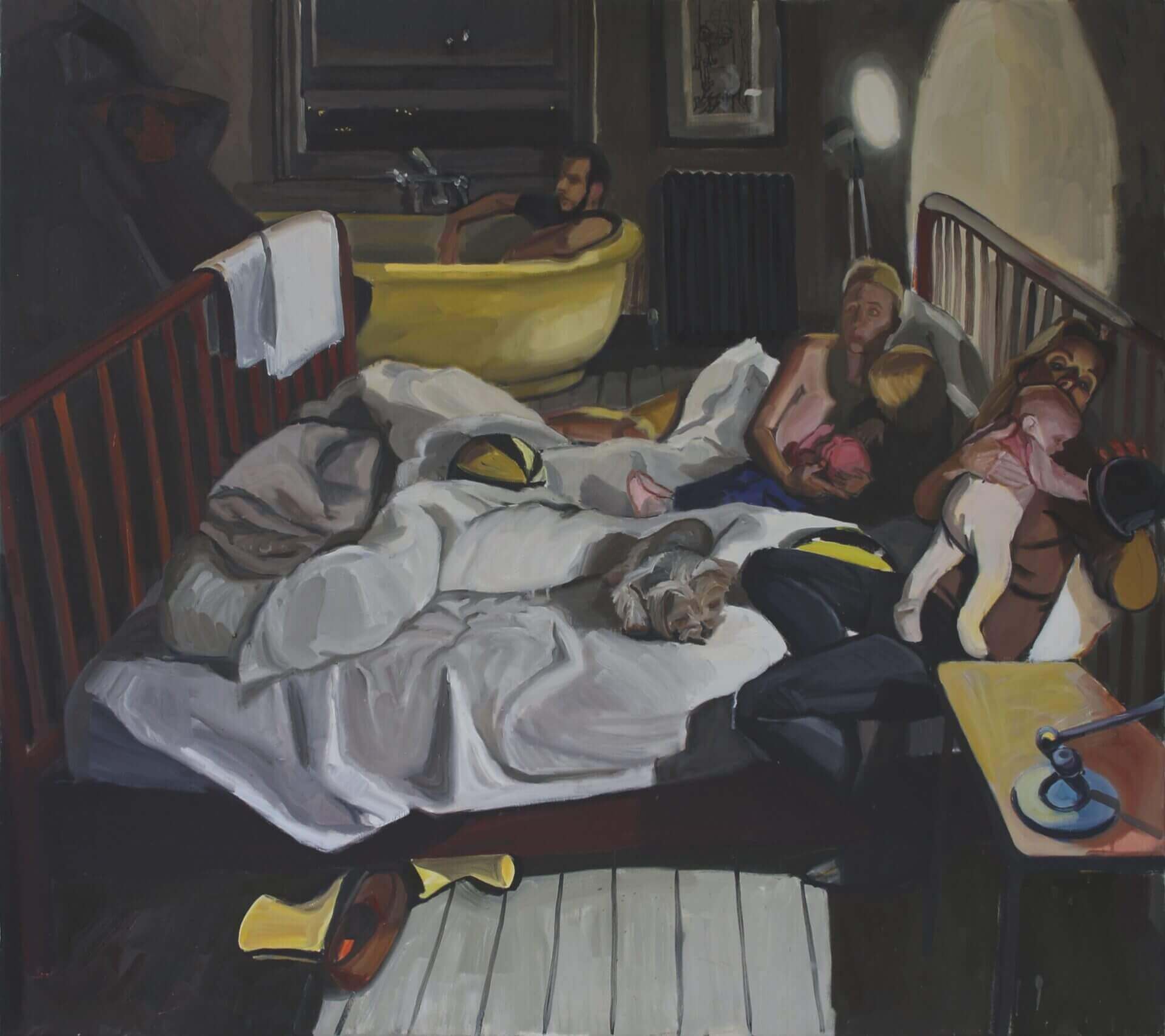 Can you name 3 women who have informed your artistic practice?

Three is not nearly enough but if I had to choose, they would probably be Käthe Kollwitz, Suzanne Valadon and Alice Neel.

Can you talk about the portrait that won you the BP portrait award at the NPG in 2013?

I won the award in 2013 after being rejected twice, in 2012 and 2011, with portraits of quite well-known faces. My eldest son accused me of being shallow for painting famous people, so I decided to prove him wrong and submitted a portrait of him. He was unhappy about how I portrayed him and rather upset when the portrait won, not wanting to be seen this way publicly. I have come to realize my portraits often evoke an initial response of shock from the sitter. I find this a little upsetting, but my aim is always to honestly represent my response to the sitter. I generally don’t like heroic portraits, preferring the verist German portraiture of the 1920s and 1930s. 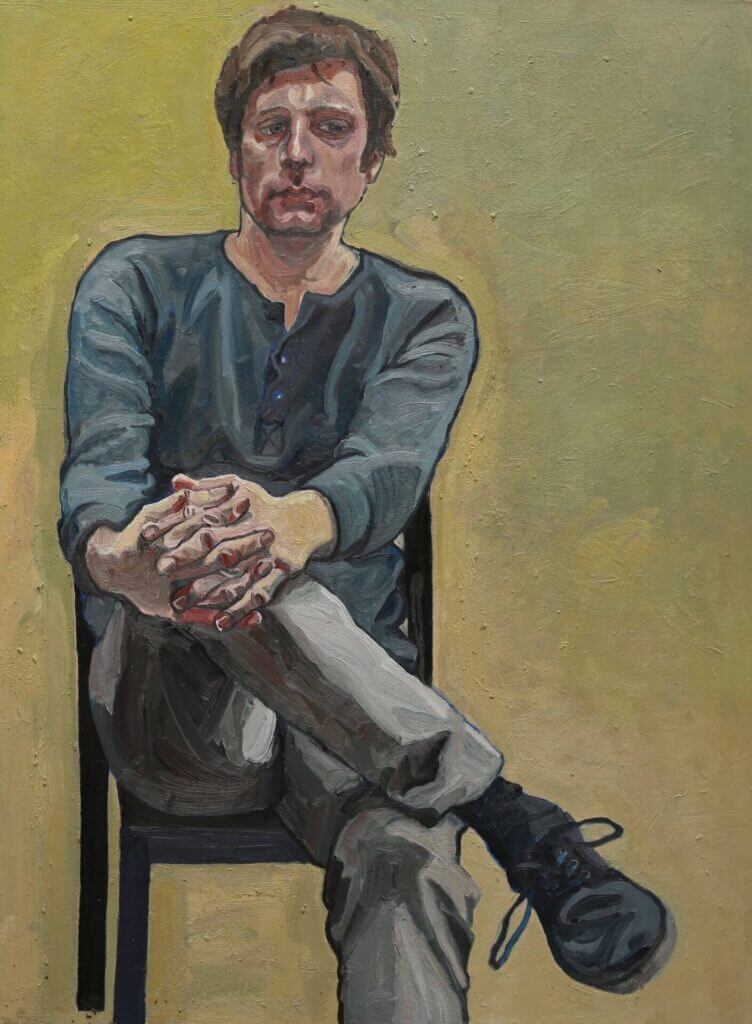 Being a mother has led to a lot of disruption in my career, making it difficult to foster continuity, focus and growth in my work. Having children was a decision I made freely, but being a mother and an artist are two very different realities which I found to be in constant tension with one another. This dualism has been the real story of my life.

What do you consider the best portrait of the 20th century?

Wow, difficult question. I have always loved and admired Otto Dix’s portrait of Dr Fritz Perls, 1966. I can’t claim it’s the best but I find this painting hugely inspirational. 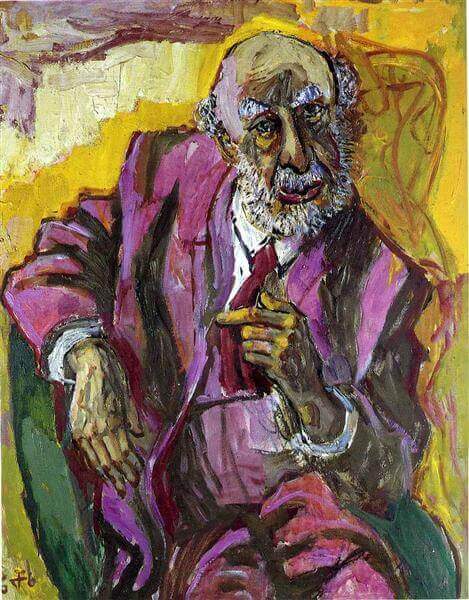 What draws you to portraiture above all else?

I love portraiture because I identify with sitters as fellow human beings who experience the same world I live in, share the same feelings of joy, sadness, disappointment, love, fear, anxiety, anger, nostalgia, confusion, exhaustion. Portraiture lends itself to the expression of such emotions. 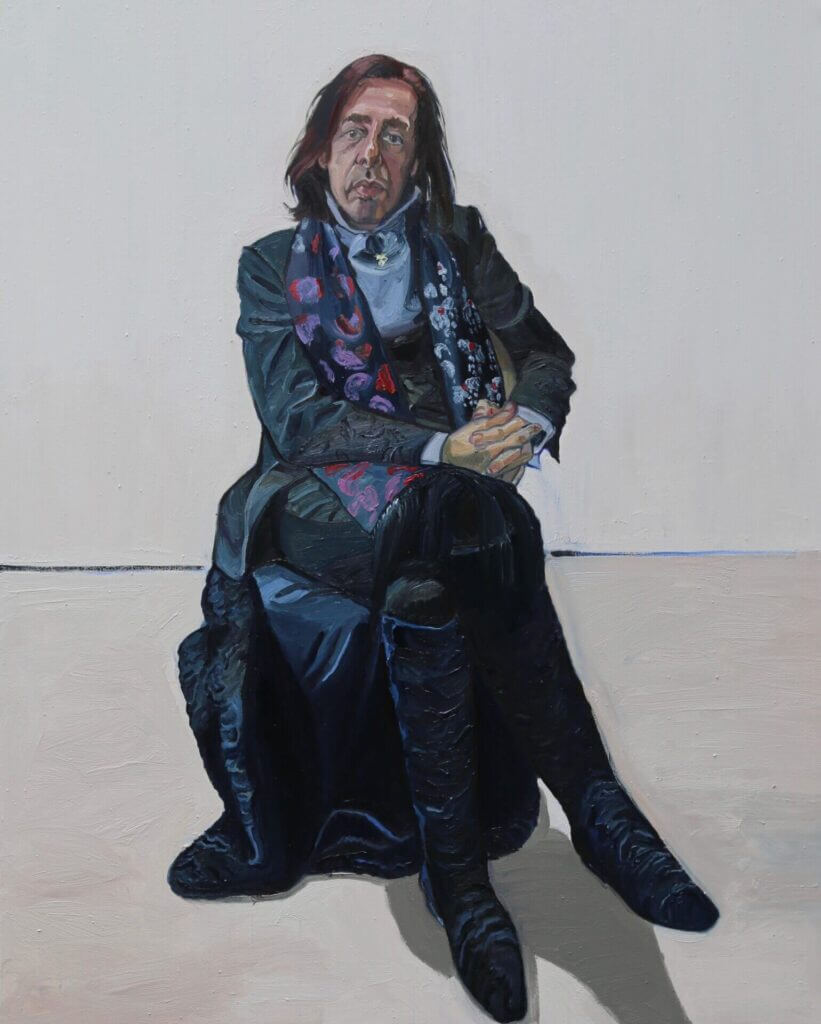 Can you speak about how artist Alice Neel has influenced your work/portraits?

I became aware of Alice Neel’s work during the eighties when I studied at Massachusetts College of Art. I was starting to switch to figurative painting during this time, and I was struck by her honest and direct interpretation of people, and the absence in her portraits of that perfecting process borrowed from the store of classical ideas. Her portraits embodied everything I strove to capture in my work – emotion, empathy, intensity, confidence, courage, and not using a formulaic palette for flesh tones. 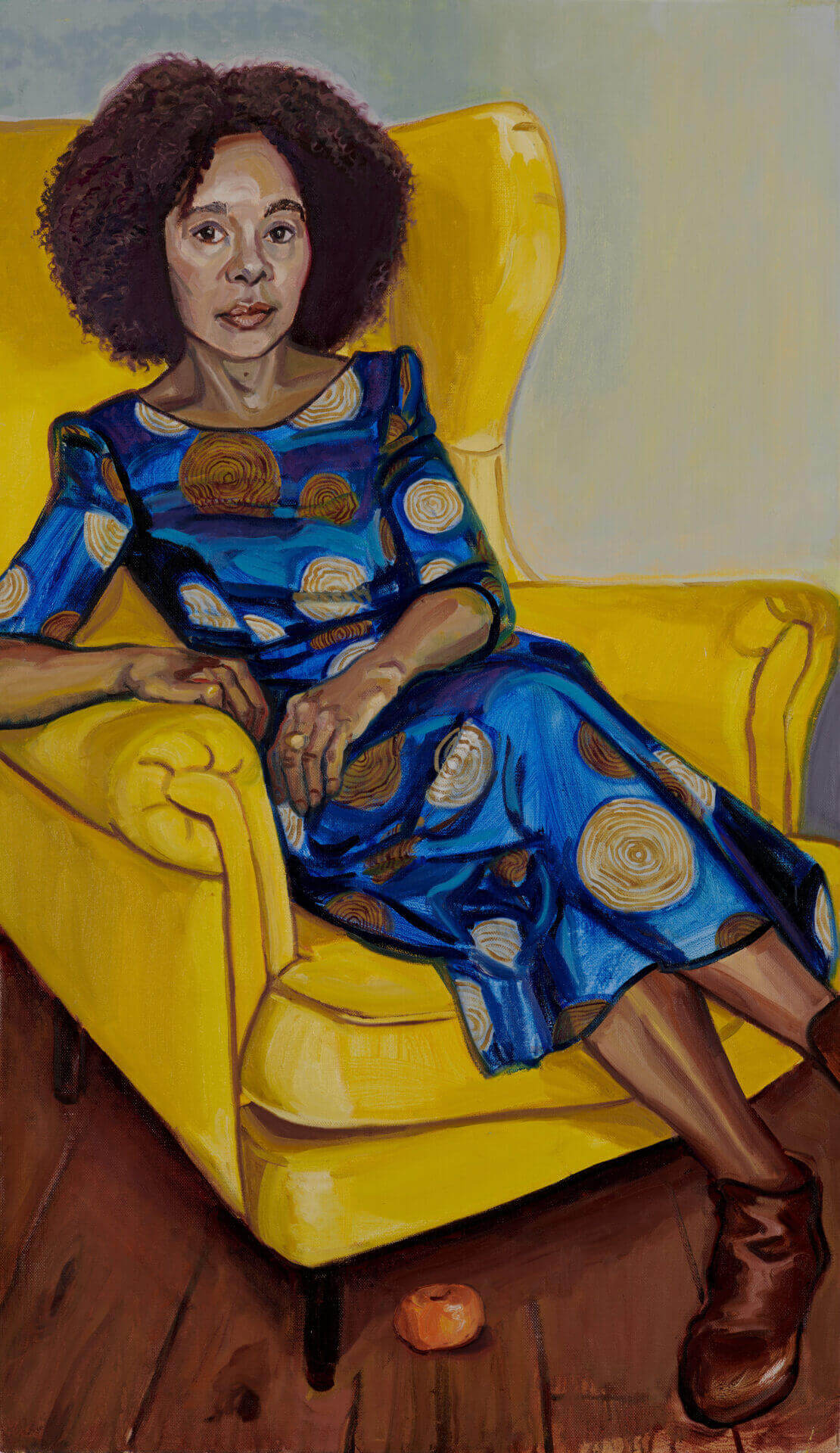 Can you tell us about a past project/collaboration you are particularly proud of?

A past project (but also an ongoing one) I’m proud of is my work on Motherhood. I have always taken as my subjects things that are familiar to me. In that sense it was natural that I would want to paint my daughters’ experience of motherhood, an important juncture in their lives but also in my own; the eruption of a new generation into my most intimate surroundings. But I didn’t anticipate the degree to which this would force me to relive and reinterpret my own experiences. The social setting in which my daughters have become mothers is very different to the one in which I did: their autonomy and right to a career was never questioned. Yet I immediately recognised that they were struggling with the same visceral dilemma between personal fulfilment and the desire to raise children. I felt the inner turmoil created by that dilemma all the more powerfully as I made these paintings because I was, at the same time, discovering it in my own past. I’m delighted that some of my work from the Motherhood series, along with an essay, will be included in the book ‘An Artist and A Mother’, to be published by Demeter Press in April 2023. 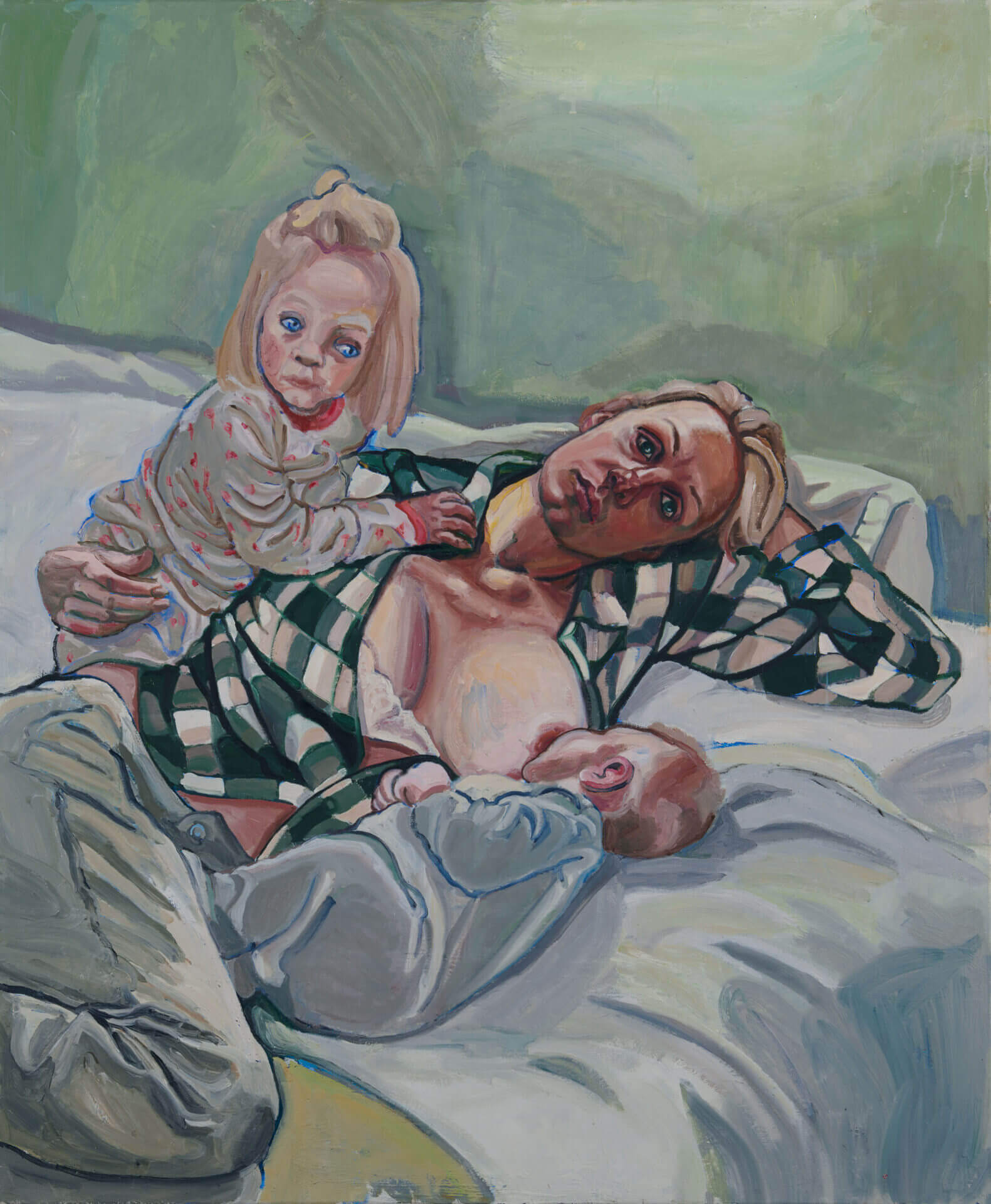 Can you tell us about your upcoming portrait commission?

The project I’m working on at the moment, ‘Painting Women Writers’, came about after I finished my NPG commission, which was a portrait of the author Jeanette Winterson. Painting Jeanette awakened me to the fact that writers are not just interesting people, but often have unusually deep emotional and imaginative lives, making them compelling subjects for portraiture. So I decided to do a series on women who write. This again proved to be an extraordinary experience, meeting and painting women who need to be seen. I especially wanted to represent them in the places where they live and work. The series will be showing at the London Library next year. There will also be a book published by Eiderdown Books, which will show the portraits alongside my drawings and studies, some reflections on the experience of meeting and painting these women, and finally some responses from the authors themselves. 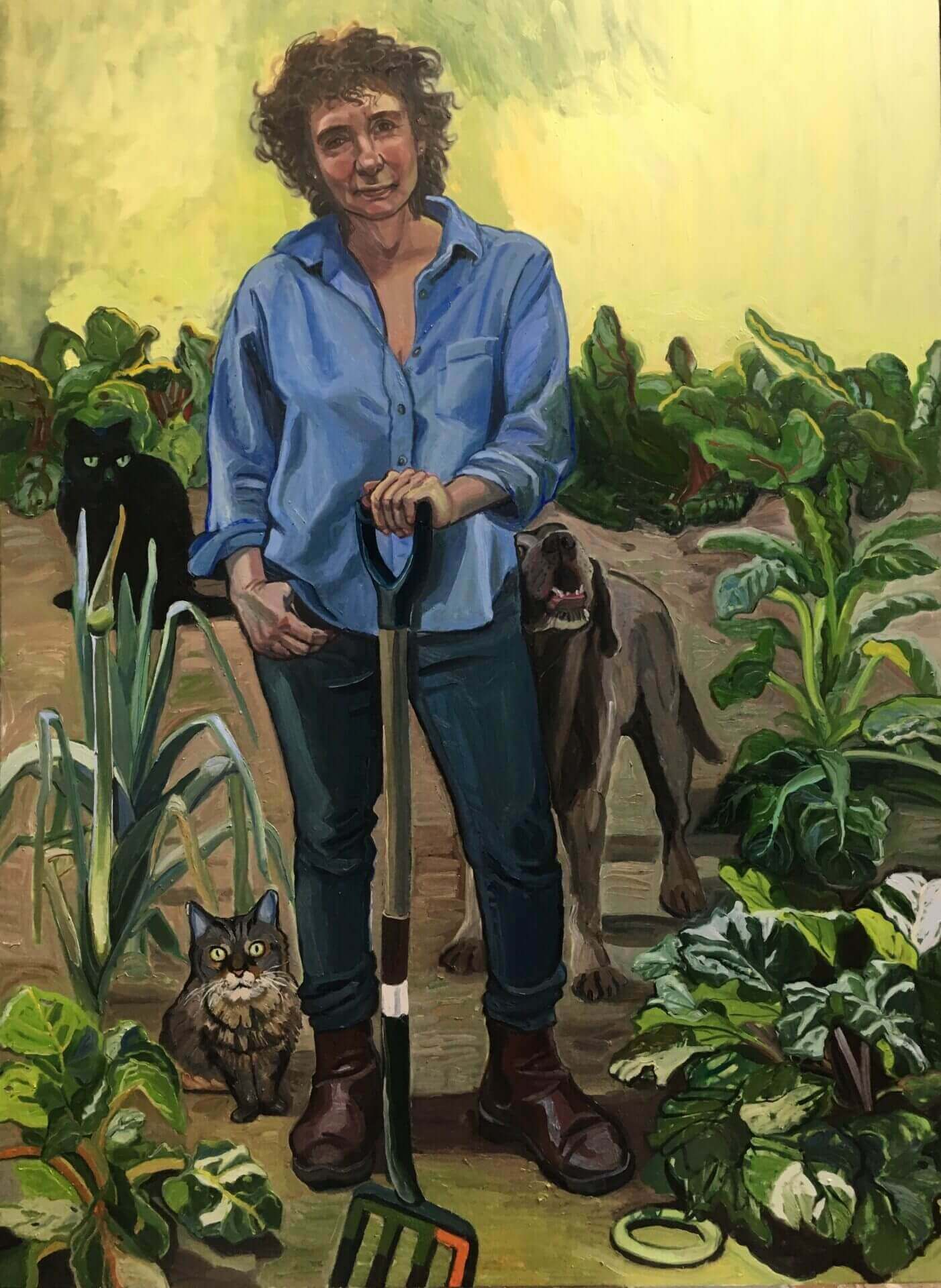