The Incredible Story of Margaret Keane

Born Peggy Doris Hawkins, artist Margaret Keane (1927-2002) is today best known for her deeply melancholic, saucer-eyed children, a motif that she started painting as a child:  “Those sad children were really my own deep feelings that I couldn’t express in any other way,” said Margaret Keane in a 2014 interview with The Guardian. “I was actually putting my own feelings into that child I was painting”. By the 1960s, the paintings were ubiquitous, with stars including Dean Martin and Joan Crawford buying the originals. Andy Warhol said at the time: “I think what Keane has done is just terrific. It has to be good. If it were bad, so many people wouldn’t like it.” Patrons included Natalie Wood and the Kennedys. It was one of the biggest success stories in the modern art world and the works collectively made millions, but Keane was denied credit for her work by her second husband, Walter Keane (1915-2000), who claimed them for his own, forcing her for over a decade into virtual slavery to maintain his false claim to her trademark work. Margaret recalls the day she realised that her husband was selling her work as his own : “the centre of Walter’s universe in the mid-1950s was a San Francisco beatnik club, The Hungry i. While comedians such as Lenny Bruce and Bill Cosby performed on stage, out at the front, Walter was selling the big-eyed-children paintings when somebody walked over to me and said: ‘Do you paint too?’ And I suddenly thought – just horrible shock – ‘Is he taking credit for my paintings?” Walter’s memoirs which he published in 1983, to shore up his own claims, recounts with all the delusional calculation of a narcissist how during years, before he’d risen to fame for being, in his own words, the best painter of eyes since El Greco and a self-proclaimed Michelangelo, Margaret had gushed over his talent when they had met outside an art exhibition in San Francisco in 1955. “I love your paintings” she told me. “You are the greatest artist I have ever seen. You are also the most handsome. The children in your paintings are so sad. It hurts my eyes to see them. Your perspective and the sadness you portray in the faces of the children make me want to touch them.”  According to Walter, her adoration of his genius did not stop there – she went onto affirm that he was the greatest lover in the world. 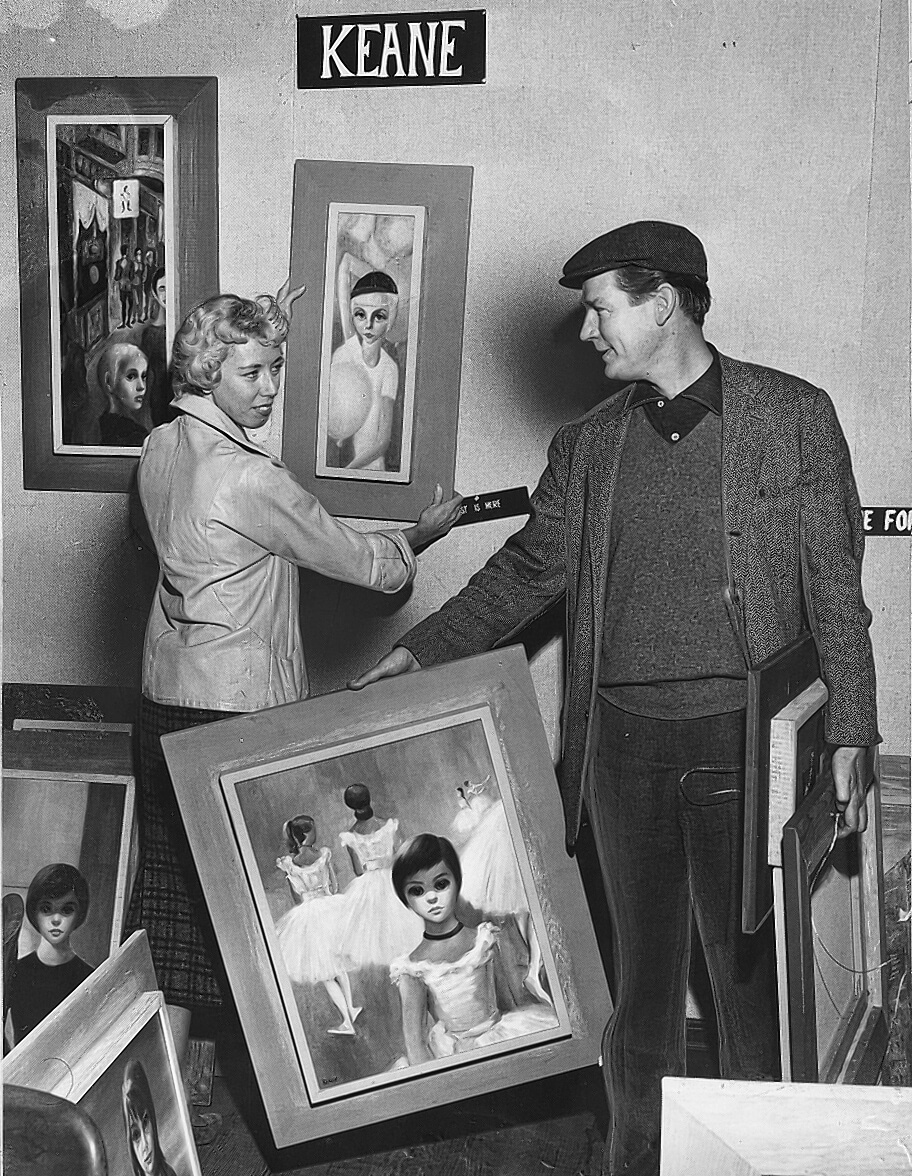 They later married marking tragically for Margaret a decade-long period of terrible physical, psychological and emotional abuse. He manipulated Margaret into silence and would tell her “we need the money. People are more likely to buy a painting if they think they’re talking to the artist. People don’t want to think I can’t paint and need to have my wife paint. People already think I painted the big eyes and if I suddenly say it was you, it’ll be confusing and people will start suing us.” Working 16 hours a day, locked in a room with the curtains closed, Margaret never received any financial compensation from her husband. Chapters from his own memoir recall the carefree and fast paced life he was living from the celebrity status he had gained “There was always three or four people swimming nude in the pool (…) everybody was screwing everybody. Sometimes I’d be going to bed and there’d be three girls in the bed. The Beach Boys would visit, Maurice Chevalier, and Howard Keel…” but Margaret never saw them, because she was isolated in her virtual prison. “He wouldn’t allow me to have any friends. If I tried to slip away from him, he’d follow me. We had a chihuahua and because I loved that little dog so much, he kicked it, and so finally I had to give the dog away. He was very jealous and domineering. And all along he said: ‘If you ever tell anyone I’m going to have you knocked off.’ I knew he knew a lot of mafia people. He really scared me (…) he was always pressuring me to do more. One day he had this idea that I’d do this huge painting, his masterwork, to hang in the United Nations or somewhere. I had a month to do that.” 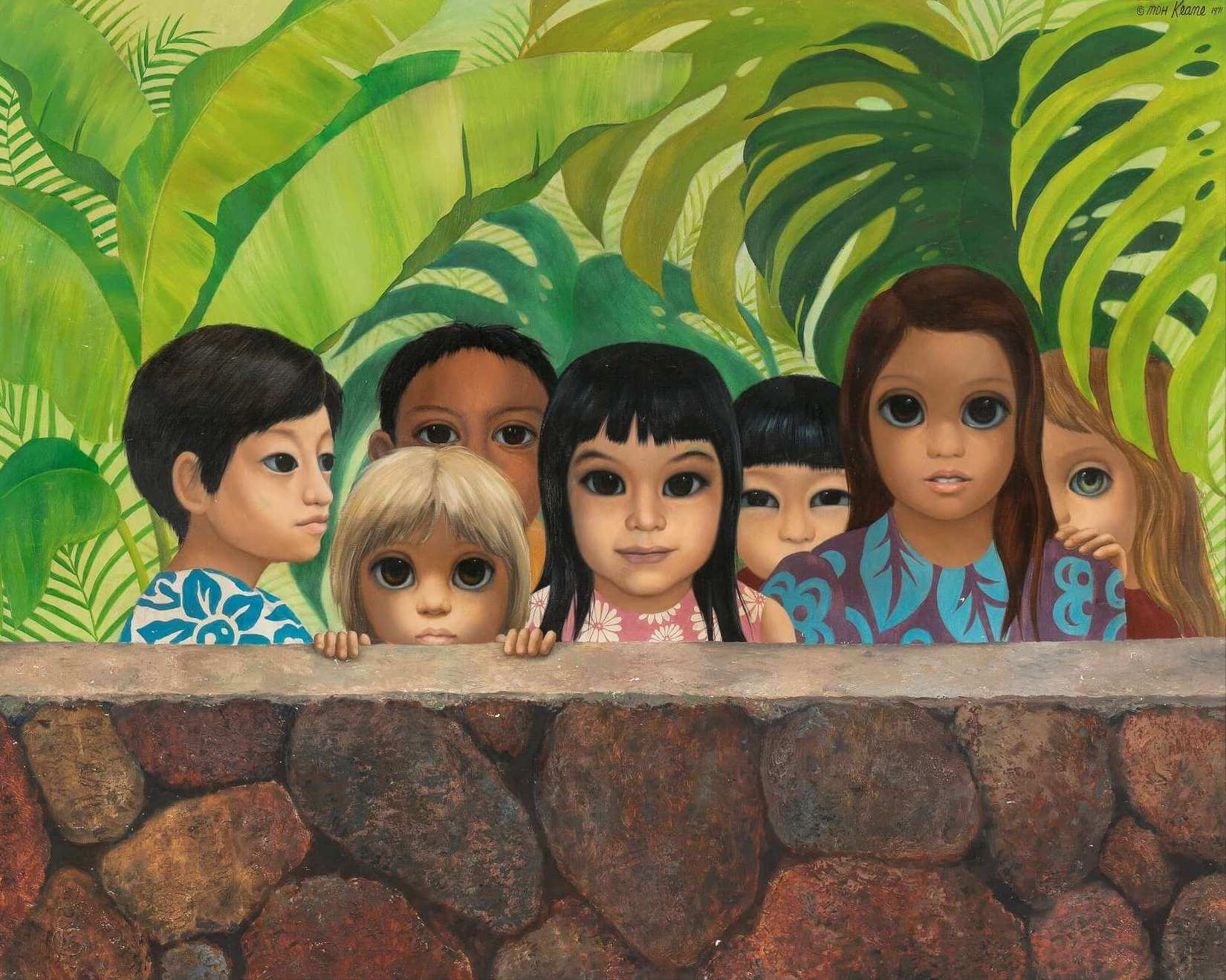 It wasn’t until October 1970, soon after their divorce, that Margaret told a reporter from the United Press International everything. Walter went on the offensive and continued to lay claim to her work whilst publicly slandering Margaret and calling her a “boozing, sex-starved psychopath” in the national press. Sixteen years later, in 1986, Margaret sued Walter in court and won. The judge challenged them both to paint a child with big eyes, right there in court, in front of everyone. Margaret painted hers in 53 minutes whereas Walter said he couldn’t because he had a sore shoulder. Despite her victory of sorts, Margaret never received any damages as Walter Keane was by now bankrupt having drunk away a large part of their fortune. The defence also sought to exonerate Walter on health grounds arguing that he had a rare mental condition called ‘delusional disorder’ which further allowed him to escape any form of accountability. One cannot help but notice the echoes of this line of defence with ‘the infidelity defence’ which was still being used prominently at this time. This allowed men who killed adulterous wives in fits of rage to claim provocation and loss of control as a way of reducing a murder charge to manslaughter (and, remarkably, remained until 2009 an accepted defence in the UK and even more distressingly remains a tactic which is still used in many parts of the world today.) Remarkable as Margaret Keane’s story is – best known today through the film ‘Big Eyes’ directed by Tim Burton in 2014 – it presents an underlying truth about prejudices that continue to exist in judicial systems around the world. Bias in the courts continues to silence women and too often unfairly handle cases of abuse and misogyny to this day by continuing to grant men ‘special understanding’ based on their gender and social status. Margaret never received the acclaim in her lifetime or financial rewards she was rightly due but at 91, she was awarded a lifetime achievement award during a retrospective of her work by the Los Angeles Art Show which she described as ‘a real blessing’. This tragic story points to the blatant underestimation of women’s capabilities in the art-world once again by a society and culture that so effortlessly create environments for figures such as Walter to thrive in, whilst Margaret suffered in silence. While more rare today, thanks to social media platforms and a decrease in tolerance for patriarchal abusive behaviour, cases similar to this continue to take place around the world, especially in areas where women are not granted the same status of equality as in western countries. This is one of many reasons to continue uplifting and investing in artists from more marginalised groups to allow for a fairer and kinder environment for up and coming artists of all backgrounds.